Join our analysts as they cover data releases and their impact on markets in a Live Webinar.

A recently beleaguered greenback continued lower Wednesday on the back of the Fed’s minutes for August. A familiar hawkish tone rang through the report and reminded markets that the Fed is still on pace to tighten rates, but the concern over rising downside risks tempered any upside swing for the dollar.

The minutes from August 1st contained notable changes from the previous release, highlighting concern over rising trade tensions. “Escalating trade tensions between China and the United States prompted notable market moves, particularly in foreign exchange markets” was a notable remark in the minutes but was made in conjunction with assurance that trade tensions had not affected the outlook for US monetary policy at this time.

Although trade has not affected the Fed’s policy, officials expressed concern that it is muddying the case for future decisions. “Some participants suggested that, in the event of a major escalation in trade disputes, the complex nature of trade issues, including the entire range of their effects on output and inflation, presented a challenge in determining the appropriate monetary policy response.” The Fed’s comments regarding trade are much more direct than they have been in the past and suggest trade is a mounting concern for the central bank.

Get up to speed with a Brief History of Trade Wars.

Despite the concern for downside risk, Fed officials cited economic momentum as upside risk and continued their hawkish rhetoric regarding many aspects of the economy. Still, the report could not deliver the greenback from its recent downswing, posting four consecutive days of losses. Should the dollar basket close lower Wednesday, it would mark the fifth consecutive close lower. The recent downturn was sparked as emerging market fears waned and President Trump expressed his distaste for the Fed’s hawkish stance. 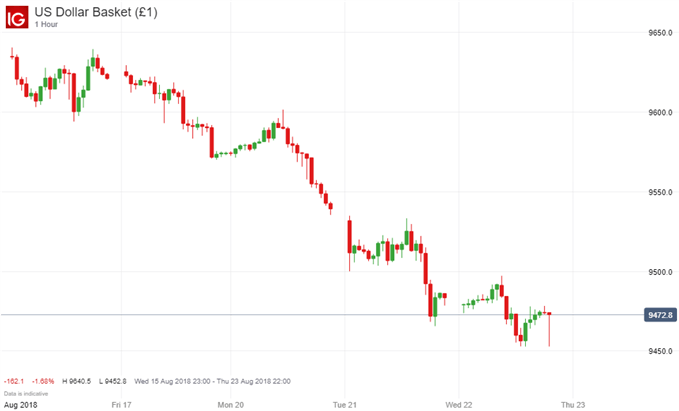 Despite the President’s comments, the next Fed meeting on September 26th is likely to result in a hike, with CME futures calculating the probability at 93.6%. The resultant rate would be 2.00-2.25% assuming a 25 basis point bump. 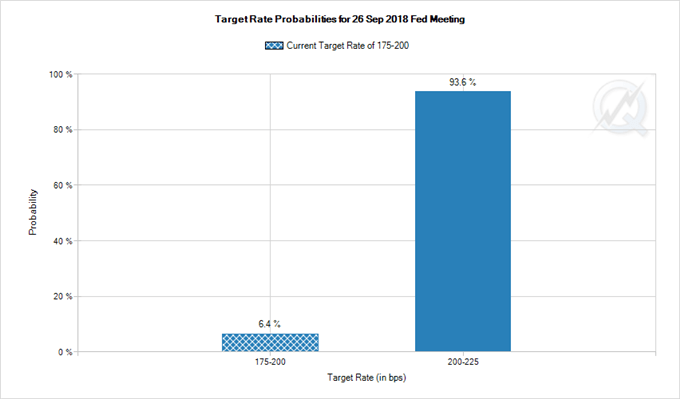 The minutes had minimal immediate impact on the dollar basket. However, with no reprieve offered, a case could be made for a bearish dollar in the near future as DXY moves off 16-month highs. At the time of this article, the dollar basket rebounded slightly from intraday lows and traded near 94.70. 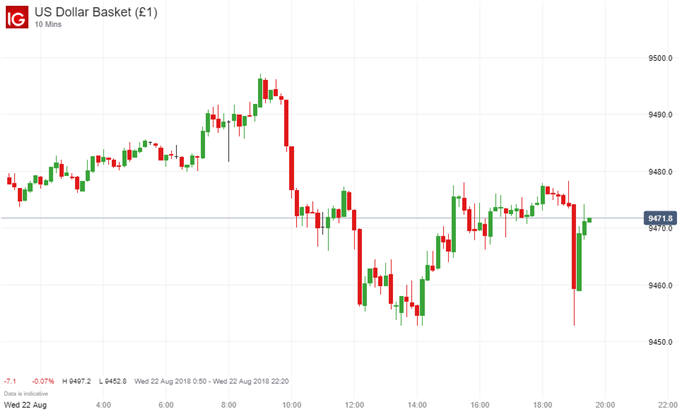 With a pretty quiet week for economic data, the minutes could prove to be the most important listing for the dollar. Other dollar-related events in the week are the annual central bank symposium in Jackson Hole beginning Thursday where Fed Chairman Powell is expected to deliver a speech. US durable goods are due Friday, but neither event is likely to propel the dollar higher. For other events due this week and the weeks ahead, check out our economic calendar.