Asia/Pacific benchmark indexes traded mostly higher heading into Wednesday’s close. A few remained pressured after Michael Cohen’s anticipated guilty plea and Paul Manafort’s verdict triggered a partial bout in risk aversion towards the end of the US trading session. The Shanghai Composite for example was down about 0.52%. Others brushed off these developments and headed higher.

The Nikkei 225 was one that fared better, rising more than 0.70% as it approached its highest close since August 10th. The index was led to the upside by information technology and autos. South Korea’s KOSPI also traded higher, rising around one third of a percent. This would also mean its longest consecutive daily winning streak since early June.

Australia’s ASX 200 on the other hand underperformed. The government faces some uncertainty after Prime Minister Malcolm Turnbull rejected resignations from cabinet members to suppress renewed leadership challenges. In addition, he lowered hopes of future simulative fiscal policy measures by announcing that they will not be taking corporate tax cuts to the next election.

Looking at currencies, the Canadian Dollar briefly rallied as a report from Politico uncovered that the US is preparing to announce a Mexico NAFTA pact this Thursday. Canada has been left out of talks lately and an agreement between the US and Mexico could pave the way for the country to return to negotiations. The Mexican Peso also rallied, but some of the gains in both were pared.

The cautious improvement in market mood boded ill for the anti-risk Japanese Yen. Better-than-expected New Zealand retail sales data boosted NZD. Even so, the data has limited implications for RBNZ rate hikes in the near-term. Political uncertainty in Australia likely weighed against AUD as it fell across the board though. Its other high-yielding alternative, NZD, reaped the benefits from risk trends instead.

Ahead, stocks and the US Dollar will look to the FOMC meeting minutes where more hawkish commentary could boost the greenback. This could offer a break for USD as it is now on its longest daily losing streak since early July.

After breaking below an ascending trend line from April, the ASX 200 remains supported by a near-term rising line from late June. Confirmation of its dominant uptrend being overturned could come via a close under the latter. Such an outcome exposes the 23.6% Fibonacci retracement at 6,208 as the next potential target. 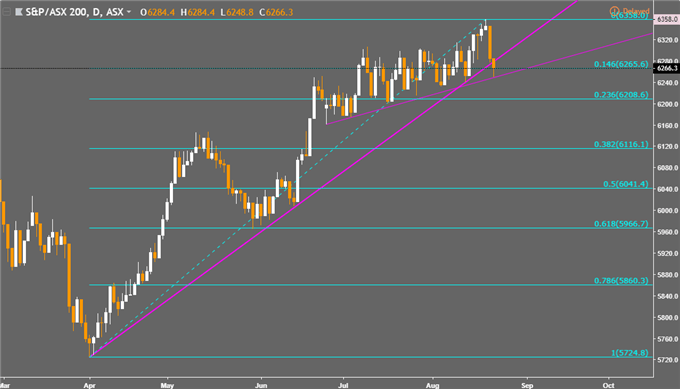