The US and China have been embroiled in a steadily escalating trade wars for the past five months. Yet, the implications this economic conflict represents to the rest of the world seems to have been generally downplayed by global investors. Yet, new fronts in the United States’ offensive against the emerging market have made it more difficult to overlook the pressures at hand. The deterioration of the Turkish Lira following the implementation of US tariffs spread to the euro on Friday August 10th, worrying market participants globally. Concern of contagion arose from the exposure of European banks to the Turkish economy. In particular, Spain, France, and Italy have the largest outstanding balances. In total, Europe is owed $194 billion from Turkey. And, while action from Turkish regulators and an investment pledge from Qatar has offered some hope of stability, the damage to investor complacency may already be done. 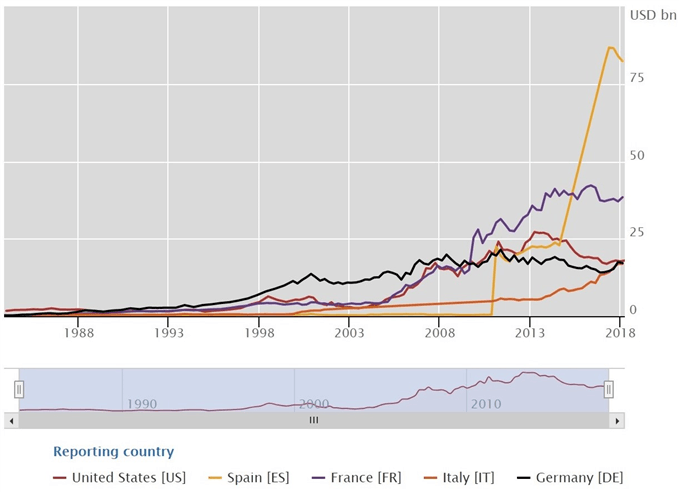 Turkey Moves to Buoy the Lira

Since its initial tumble two weeks ago, Turkey has moved to stem losses for the Lira. Battling an ailing currency, Turkish regulators have set the leverage ratio in the lira FX market to 1:1. The move immediately cut some losses for the currency as the USD/TRY currency pair moved below 6.5. Following the announcement, Qatar announced a pledge to invest $15 billion in Turkey. The lifeline added further strength to the lira, pushing it below 6.0. However, through Friday August 17th, the Turkish courts rejected calls to release the American pastor Andrew Brunson at the center of this standoff, checking the next move back to the US government which said Thursday it was ready with new sanctions is compromise was not found.

The Battle of Higher Returns and Higher Risk

Emerging markets, in part due to their higher interest rates, offer investors the prospect of high returns should they be willing to accept elevated risks. The opportunity for higher growth is quite an attractive prospect for many investors as well as banks, especially considering the stable economic conditions the world has experienced in recent years. The economic climate encouraged many European banks to confidently increase their exposure to emerging markets like Turkey and China. 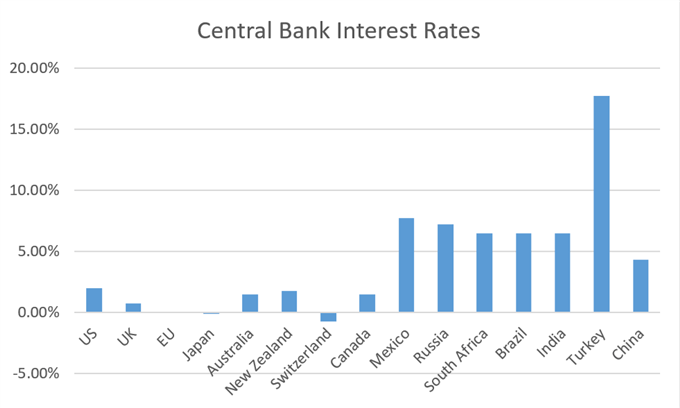 In contrast to the ‘developing’ world, many of the developed economies still maintain record low interest rates, attempting to spur or maintain their current levels of economic growth. However, with a benchmark like the US moving to normalize its benchmark rates and other major leaders on the cusp of following suit, emerging markets may steadily lose attractiveness as rate differential decrease while the skew in risk grows. 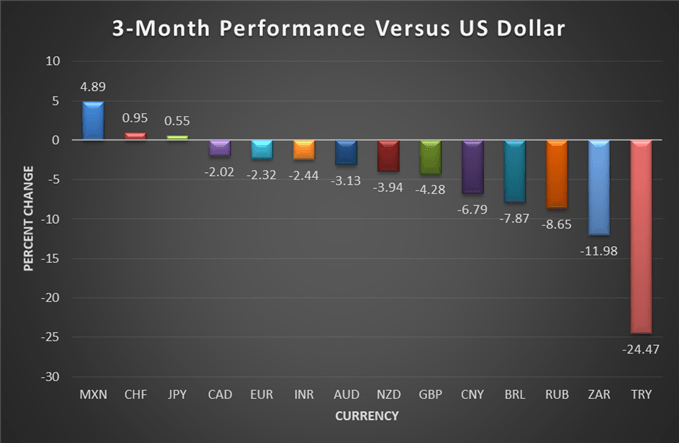 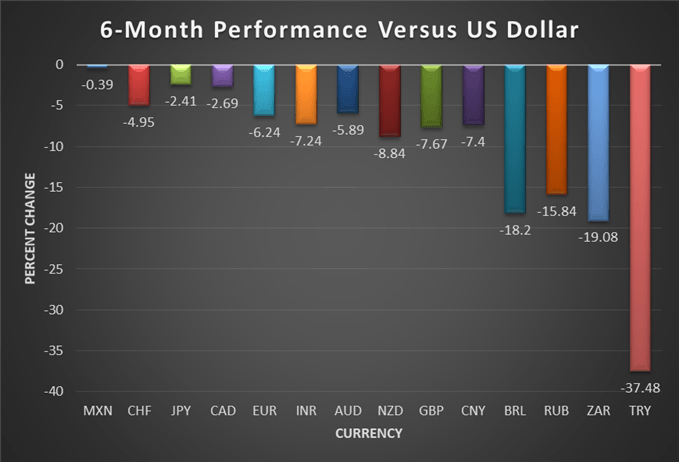 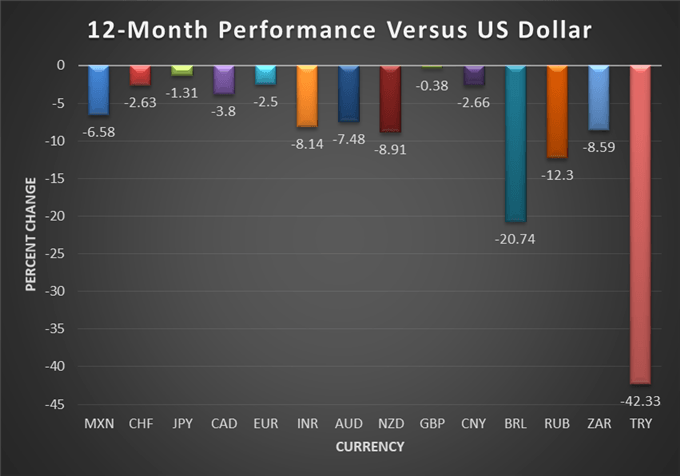 Emerging Markets Suffer Losses despite the Promise of High Return

With a few minor exceptions, emerging market currencies have been battered during the last twelve months, with the most recent Lira developments exacerbating losses. The South African Rand for example has seen considerable weakness on the back of the Turkish currency’s drop, most likely due to the country’s similar size and profile, since the two countries do not have significant exposure to each other.

The longer time-frame also showcases when the Ruble’s losses started to accumulate. Due to tariffs and sanctions, the Russian Ruble felt serious pressure in the past 3 to 6 month range – though it has not seen the same scale of loss as Lira or arguably the Rand. The resilience of the Ruble is likely due to its large volume of energy exports, consistently providing the nation with a steady stream of income despite geopolitical concerns.

Yet the Ruble may fall under further pressure in the coming weeks after US Deputy Secretary of the Treasury Sigal Mandelker said the US “will not hesitate to bring economic pain to Russia if its conduct does not change.” Should the US impose further restrictions on Russia, the Ruble would undoubtedly feel significant pressure, adding to the broader turmoil in emerging markets.

The Chinese Yuan has similar slid in the past weeks as the United States presses on with import taxes targeting specifically China. Yet, like many emerging markets in Asia, the Yuan has suffered less than other geographical regions in just this past week due in part to markedly fewer contagion fears.

Developed markets have also lost ground to the greenback during this time. The Japanese Yen and Swiss Franc have performed admirably, due to their stability and relative safe-haven status. The two havens received a boost after the recent emerging market contagion fears, offering a rebound from some of their losses earlier in the year. 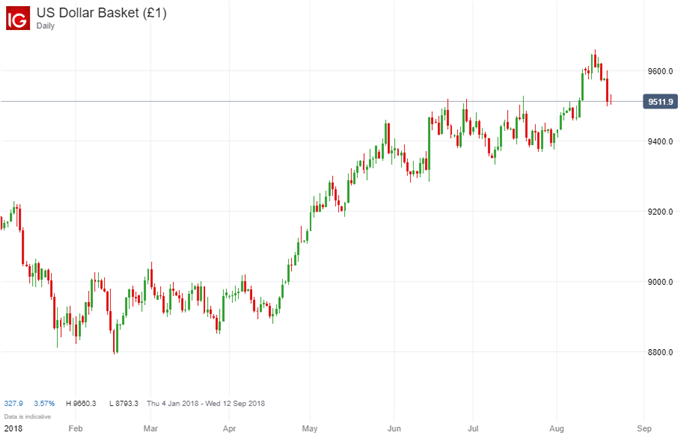 Still, the dollar remains on top for the time being with multiple tailwinds. One such tailwind is the hawkish rhetoric touted by the Federal Reserve. With future rate hikes, investors will receive even higher returns in an effectively risk-free environment. At its current benchmark range from 1.75 to 2.00 percent, the Dollar already represents a higher yield than the traditional carry currencies amongst the majors – the Australian and New Zealand Dollars. It would take far more hawkishness than the Fed is likely willing to entertain for the US to see baseline returns at levels comparable to the average for emerging markets. Yet, how much will the prospect of ‘safety’ count when determining appetite for returns? If volatility persists or global capital markets outright decline, the stability factor will matter far more than a modest yield advantage. In that scenario, the Dollar may very well rise, but emerging markets would almost certainly face further capital outflows as investors look to protect their funds.