S&P 500 futures are pointing lower ahead of Wednesday’s Asia/Pacific trading session after reports crossed the wires that former Trump campaign chairman Paul Manafort was found guilty on at least one count. Initial headlines hours earlier that Michael Cohen was also set to plead guilty helped trigger a partial bout of risk aversion in the markets. US government bond prices rose as yields fell across the maturities spectrum.

While Wall Street finished the day mostly higher, the S&P 500 (+0.21%) relinquished gains after gapping and climbing to a new record high. This followed a general improvement in market mood that began in the earlier APAC session. Despite the late day drop in stocks, the anti-risk Japanese Yen was still overwhelmingly the worst performing major on Tuesday.

Demand for the similarly-behaving US Dollar, which at times appreciates in times of marketwide risk aversion, waned as DXY suffered a fourth consecutive day of losses. This was its longest losing streak since early July, over six weeks ago. However, the dominant uptrend since February remains intact. Weakness in USD offered an opportunity for its liquid rival, the Euro, to appreciate across the board.

The New Zealand Dollar appreciated aggressively across the board in early Wednesday trade after better-than-expected local data crossed the wires. New Zealand retail sales (ex inflation) rose 1.1% q/q in the second quarter. However, gains may not transpire in the long run as rosy economic statistics seem unlikely to inspire an RBNZ rate hike in the near-term given that they don’t intend to act until 2020.

With that in mind, the deterioration in sentiment towards the end of Tuesday’s session may echo into Wednesday Asia/Pacific trade. In the event that the Nikkei 225 turns lower along with other benchmark indexes, NZD could find itself paring gains. In fact, the other sentiment-linked Australian Dollar is already lower while the Yen is heading cautiously higher.

NZD/USD has clocked in its 4th consecutive winning streak on the daily chart, the longest since early July. However, prices were unable to push above a near-term descending resistance line dating back to June. Given that market mood may deteriorate ahead and the potential lack of a hawkish backing from the RBNZ amidst the retail sales data, we may see NZD/USD resume its dominant downtrend since April. Near-term support seems to be between 0.65633 and 0.65454 (the current 2018 lows). 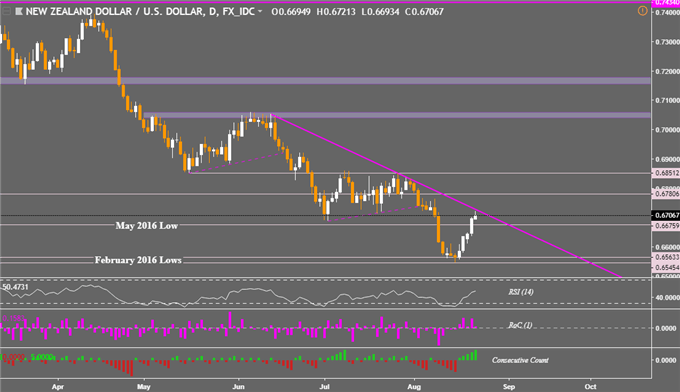