Asian stocks were mostly higher on Tuesday with trade hopes once again to the fore. Investors seem optimistic that the US and China can find some way to cool their tariff war when officials from both countries meet later this week.

Almost the major bourses were higher in afternoon trade, including the Nikkei and the Shanghai Composite. However, Australia’s ASX200 benchmark was the laggard, falling nearly 1% as banks, financials and certain retailers attracted sellers.

The US Dollar weakened a little as the markets reacted to Donald Trump’s comment about his not being ‘thrilled’ about ongoing Federal Reserve interest rate rises. Tension between the White House and the Fed is rarely something investors enjoy. The Australian Dollar was knocked by a set of policy meeting minutes from the Reserve Bank of Australia which was dovish, but arguably no more so than usual.

USD/JPY did manage something of a fightback from its lows in Asian trading hours. 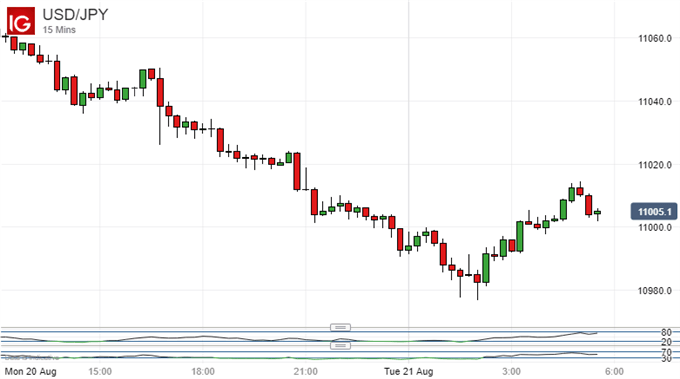 Still, Dollar bulls have still got a lot to do from a technical perspective, with the near-term daily chart outlook quite weak.

Gold prices rose thanks to that pressure on the greenback, while crude oil prices were dragged higher by concerns about US sanctions on Iran, only to slide again as investors again worries about likely global demand.

It’s another quiet day for economic data in Europe and North America, with only UK public finance numbers likely to attract investor attention