The U.S. Dollar’s August rally is in full force. The Dollar is trading higher versus the Euro, British Pound and most other majors. But it has failed to gain versus the Japanese Yen, even though the same fundamentals (widening interest-rate differential, strong U.S. growth) that have led to Dollar strength are at play with USD/JPY.

Ahead of Japanese inflation data this week, let’s take a look at futures markets for an indication on where large speculators are positioned, what that could mean for USD/JPY moving forward, and whether the Yen will continue to be a great play against a strong Dollar.

The most-recent CFTC COT Report shows that large speculators were net short 58,368 Japanese Yen futures contracts as of August 14. This is largely unchanged from the July 17 report. However, as recently as two months ago, positioning was flat – so this segment of traders has built up a heavier short position at a time when USD/JPY prices have remained relatively stable.

Often, positioning of large speculators can be used as a contrarian indicator of price movements. For example, in January and early February, traders were net short more than 100,000 Yen futures contracts (being net short these contracts would profit if USD/JPY moved higher). That positioning coincided with the USD/JPY top, right before an 800-pip sell-off took it below 105. Then in early April, large speculators switched to a net long Yen exposure, right in time for USD/JPY to put in short-term lows as the Yen sold off (USD/JPY advanced).

Even though traders are net short the Yen, positioning is not yet extreme. As mentioned, traders have been short more than 100,000 contracts at multiple points this year. The more extreme the positioning, the more conviction I would have in using it as a contrarian indicator.

Last week, it felt like everyone focused on the Turkish Lira and potential exposure faced by countries inside the European Union. With the heaviest impact on Friday August 10 and the Monday that followed, the fundamental pinch fell well within the time frame of the COT’s recording cutoff – Tuesday. In a risk-off environment, one would expect the Yen to gain. However, instead of bailing on their Yen shorts, traders held them.

Yet where the ratio of shorts-to-longs proved resilient, traders did reduce their exposure to the Yen overall versus a month ago. The positions that large speculators held in Yen futures (long and short) was at 156,000 contracts. While that is up slightly on the week, it is down 26% since traders held more than 200,000 Yen futures contracts a month ago. 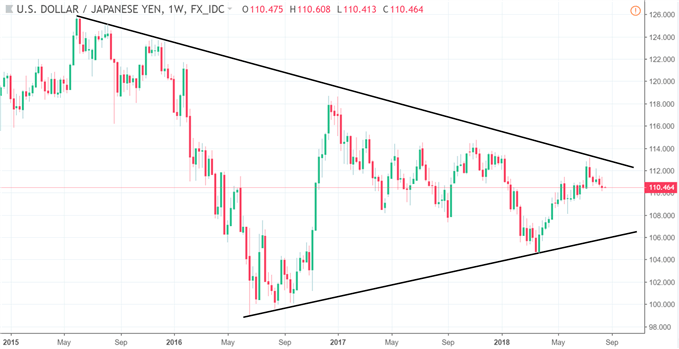 Most recently, USD/JPY touched that trend line in July. Since then, USD/JPY has put in a series of successive lower highs. All of this suggests that USD/JPY selling pressure may be intensifying, setting the pair up for a move lower.

If you are inclined to short the Dollar, USD/JPY may be a good pair to do it. Traders might eye a move to 106, where an upward-sloping trend line connecting the lows in September 2016 with the March 2018 lows may be forming. (I say that it may be forming because USD/JPY has only tested it once in two years.

Typically, a trend line becomes stronger when it connects three or more prices.) If it breaks through that floor and goes on to set new 2018 lows, traders may look for a move to the 2016 lows, just below 100.

If you believe the Dollar’s strong run may have further room, then the Yen crosses like EUR/JPY or GBP/JPY may better options to exploit Yen strength.