Market mood improved significantly towards the end of Friday’s US trading session as investors cheered decreasing trade war fears between the world’s largest economies. A report from the Wall Street Journal surfaced that China and the US are outlining a road map for talks to end the trade deadlock at summits between presidents Donald Trump and Xi Jinping in November.

This offered the sentiment-linked AustralianandNew Zealand Dollars their strongest daily gains since July 20th as the S&P 500 rose about 0.33%. There was an even bigger jump in the MSCI Emerging Markets ETF which climbed more than one percent. The perennially anti-risk Japanese Yen and Swiss Franc on the other hand underperformed as one would expect.

A particularly strong performer was the Canadian Dollar. While the relatively high yielding unit was bolstered by risk trends, it also appreciated on an impressive Canadian inflation report. Headline CPI clocked in at 3.0% y/y versus 2.5% expected which was its fastest pace since September 2011, almost seven years ago. Local front-end government bond yields climbed, signaling firming hawkish BOC rate hike bets.

The combination in gains seen from high-yielding currencies in the majors FX spectrum weighed against the US Dollar, which boasts the largest of them all. The greenback, which tends to gain as market mood deteriorates thanks its status as the world’s reserve currency, suffered and DXY had its largest single day decline coincidentally since July 20th. Perhaps gains from earlier last week on haven bids were unwound.

Ahead, the economic calendar is rather quiet during Monday’s Asia/Pacific trading session. This could place risk trends as the key drivers for the markets. Local benchmark stock indexes, such as the Nikkei 225 and ASX 200, could echo gains from Wall Street. This might allow the Canadian Dollar to continue appreciating while the anti-risk Japanese Yen and Swiss Franc resume their descent.

The drop in USD/CAD on Friday, which was the most since July 25th, occurred after failing to push above a near-term descending resistance line from June. This places the long-term ascending support line from February as immediate support. A break below it exposes a narrow range of July lows between 1.2982 and 1.2962. On the other hand, a push above resistance exposes the July 19/20 highs (1.32656 – 1.32896). 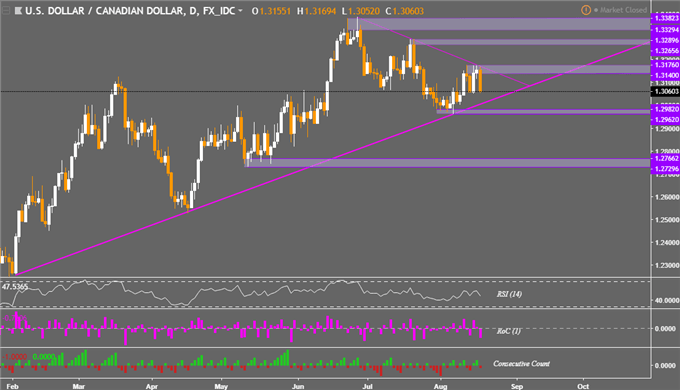