US Consumer Confidence Unexpectedly Dips in July as Expectations Lower

After a relatively quiet week for economic data, the last major piece slipped to its lowest level since last September. Falling to 95.3, University of Michigan’s consumer confidence index missed the forecasted reading of 98 and June’s measure of 97.9. Year-over-year, the index has fallen -1.5%. The survey of current economic conditions also fell, down 6.8 points to 107.8 with a month-to-month change of -5.8%. While the aggregate and conditions index fell, the index of consumer expectations remained steady at 87.3.

The decline in many of the sectors is very surprising, considering last month’s strong performance. Overall, the report shows consumers are very sensitive to price changes even as inflation rests near the targeted 2.0%. The survey found consumers see inflation at the end of the year near 2.9%. To the benefit of the Fed, it seems interest rates will impact consumer spending more drastically moving forward. With that in mind, the Federal Reserve is due to release minutes next Wednesday, which could offer new insight on their stance regarding rate hikes. To see when other potentially market moving data is released this week, view our economic calendar.

Ongoing trade wars could also negatively impact pricing for consumers, as components for vehicles, household durables, and homes rise due to steel and aluminum tariffs. Further, any auto tariffs would likely receive a rebuke and undoubtedly push vehicle prices higher in the United States.

A Brief History of Trade Wars.

Despite the rather sharp decline in the index relative to recent readings, the dollar was not immediately impacted by the results. A more palpable decline in the dollar was seen after the release of positive Canadian CPI data Friday morning. The data helped move the dollar basket further from recent highs around 96.6. The basket now trades near 95.8. 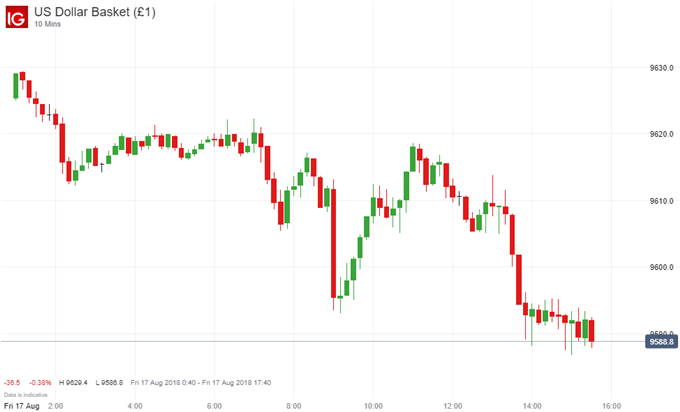 DailyFX forecasts on a variety of currencies such as the US Dollar or the Euro are available from the DailyFX Trading Guides page. If you’re looking to improve your trading approach, check out Traits of Successful Traders. And if you’re looking for an introduction to the Forex market, check out our New to FX Guide.