At a first glance, Asia/Pacific benchmark stock indexes appeared to fall across the board, echoing similar performance from the S&P 500 on Wall Street. Like the US trading session though, this was mainly due to broad gaps to the downside in equities. In fact, generally they headed higher following a development that uplifted market mood but were ultimately unable to close their gaps.

Shortly after mixed Australian jobs data, reports crossed the wires that China’s Vice Commerce Minister would visit the United States for trade talks later this month. Stocks cheered this as a meeting that could potentially help to lower the chances of additional retaliatory tariffs from the US and China as well as perhaps leading to reduced levies overall.

Market mood seemed to improve further as the Hong Kong Monetary Authority (HKMA) maintained their efforts to defend their currency peg. HKMA said that they will continue to buy HKD at 7.85. The peg has been coming under pressure by the US Dollar lately thanks to its appreciation on haven bids amidst Turkey contagion fears, and in general rising US interest rates. Hong Kong’s aggregate balance has been falling towards 2008 levels though as it spends to keep USD/HKD under 7.85.

The Nikkei 225 climbed throughout the day and pared some of the losses on the gap, down about 0.15% towards the end of Thursday’s session. Australia’s ASX 200 also attempted reversing losses from its gap, hovering around -0.1%. The Kospi and Shanghai Composite on the other hand could not find as much bullish momentum to finish the day little changed. They were down about -0.57% and -0.87% respectively.

Looking at the FX spectrum shows that “risk-on” behavior despite the appearance of stocks trading in the red. One of the worst performing majors were the anti-risk Japanese Yen and liquid US Dollar. Meanwhile, the sentiment-linked Australian and New Zealand Dollars outperformed against their major counterparts.

Ahead, the cautious improvement in market mood could bode well for European and US shares. This might offer more room for commodity currencies like the New Zealand Dollar to rally. However, signs that the UK could inch closer to a “no deal” Brexit can upset investors. Negotiations with their EU counterparts on the terms of their exit resume in Brussels later today. This result may send NZD/USD lower.

USD/JPY still remains stuck around a long-term descending trend line from August 2015 after a false breakout. After getting under it recently, it finds itself supported by the early-July lows around 110.27. Near-term resistance is the descending line connecting the set of lower highs since mid-July. A break under support exposes the June 25th low at 109.37. 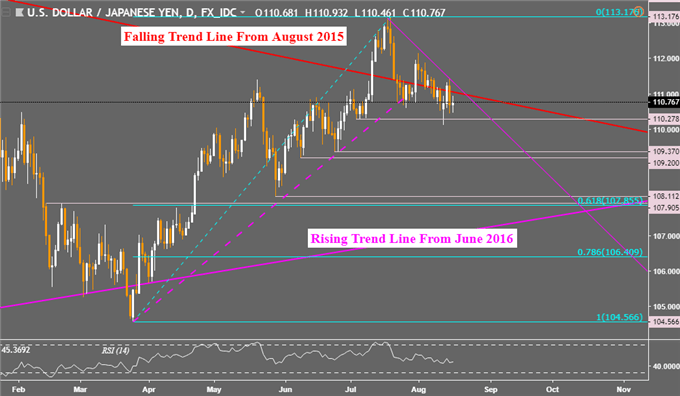