As expected, both European and US shares traded higher after hopes of reduced tariffs between the world’s largest economies sent Asia/Pacific stocks climbing. The US and China are now scheduled to meet for trade talks later this month. The Dow Jones Industrial Average climbed an impressive 1.58% which was its best single day performance in more than four months. The S&P 500 rose 0.79%, the most in over three weeks.

However, the upbeat mood in the markets faltered towards the end of the US trading session on a couple of news. First, Treasury Secretary Steven Mnuchin announced that the country is preparing more sanctions against Turkey if they do not release a detained American pastor. Also, Donald Trump said that “China is not able to give us a deal that’s acceptable”, reducing hopes of one ahead of their newly scheduled meeting.

The MSCI Emerging Markets ETF sunk on threats of additional tariffs on Turkey, paring some gains after gapping higher on the initial improvement in risk trends. This arguably led to some benchmark stock indexes on Wall Street to top, causing them to consolidate and or head cautiously lower. Some of the hopes on US and China reaching a trade agreement falling also did not help.

Still, looking at the FX spectrum shows that currencies largely managed to hold on to the momentum inspired by the earlier “risk-on” trading environment. Some of the worst performing ones were the anti-risk Japanese Yen and Swiss Franc. Meanwhile, sentiment-linked ones such as the Australian and New Zealand Dollars outperformed. The Euro relinquished some gains against the US Dollar as well.

Early into Friday’s Asia/Pacific trading session, RBA’s Governor Philip Lowe and other officials will have their semiannual testimony before the House of Representatives on economics. His commentary could further underline their status quo outlook on interest rates, the markets aren’t even fully pricing in one rate hike from the central bank next year. Thus, risk trends may be the key driver for stocks and currencies during Friday’s session. If the former echoes gains on Wall Street, we may see more Aussie strength.

Yesterday’s Hammer bullish reversal formation in AUD/USD on the daily chart has now evolved into a Morning Star pattern. Simultaneously, there is positive rate of change divergence (on a daily interval) showing that momentum to the downside is ebbing. Both of these signs warrant caution as it may precede a reversal in the near-term. But the fundamental outlook in the long-run remains bearish. 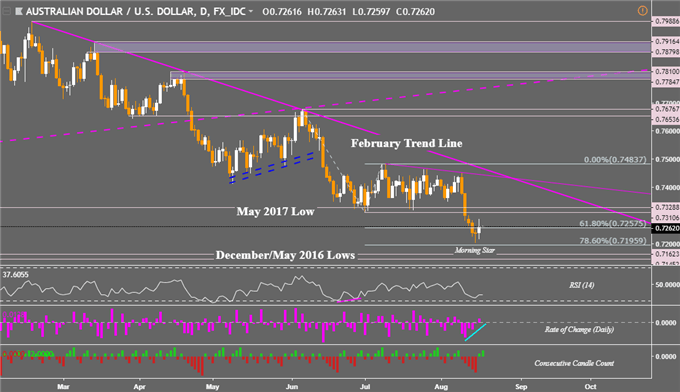