The US Dollar was largely unaffected after the release of capital movement data in the form of Treasury International Capital (TIC) flows. For the month of June, international capital flows to the United States totaled an inflow of $114.5 billion. The total inflows surpassed last month’s inflows of $69.9 billion. Long-term flows for the month of June told a different story, with an outflow of -$36.5 billion.

Although foreign inflows to the US were robust, decreases from important central banks could provide bearish sentiment for the dollar moving forward should a trend develop. China and Japan, the two largest foreign owners of US treasuries, both decreased their position. China’s holdings fell $4.4 billion to $1.18 trillion. Japan’s dropped $18.4 billion to $1.03 trillion total. The total amount of US treasuries held by Japan is now at its lowest since October 2011.

The decreased positions could be a result of the ongoing trade war, but this is rather unlikely because of the percentage of total holdings sold off. If subsequent months see similar outflows from the behemoth holders in Asia, especially China, relation to trade wars could be argued with more evidence. At this time however, any single conclusion would be too presumptuous.

The emerging markets of Turkey and Brazil also had notable changes. It is important to note this data is from last month so the recent turmoil emerging markets have found themselves in did not impact this data. Despite this, Turkey fell off the list of major holders of US treasuries while Brazil’s holdings rose to a record high $300 billion. 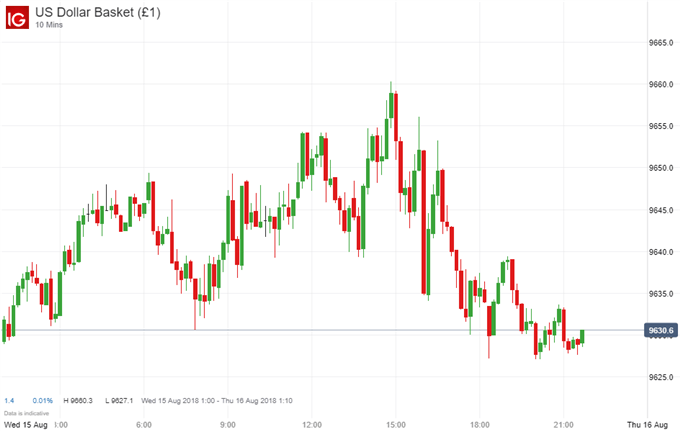 This month’s Treasury International Capital release had minimal impact on the dollar basket, or USD/JPY and USD/CNH. The data was reasonably within range and without any persistent outflow trends, it is safe to conclude demand for US assets is still very robust, evident in the total flows figure for June.

Next month’s flows will be important to watch as capital will undoubtedly shift during the current emerging market turbulence and as trade wars persist. To see when other potentially market moving data is released this week, view our economic calendar.

DailyFX forecasts on a variety of currencies such as the US Dollar or the Euro are available from the DailyFX Trading Guides page. If you’re looking to improve your trading approach, check out Traits of Successful Traders. And if you’re looking for an introduction to the Forex market, check out our New to FX Guide.