GBPUSD Price: All About US Dollar Strength and Brexit Talks

GBPUSDcontinues to trade just above 1.2700 with the pair driven by the rampant greenback. Recent UK data has been benign to mildly Sterling supportive, but GBP cannot match the strong US dollar complex.The US dollar index (DXY) currently trades at a near 14-month high, propped up by US rates – the 2-year UST yields 2.635% - and strong economic data with five additional 0.25% US interest rate hikes expected by the end of 2019. The DXY is currently in overbought territory, which may see a period of consolidation, but the fundamental backdrop remains positive for the dollar. 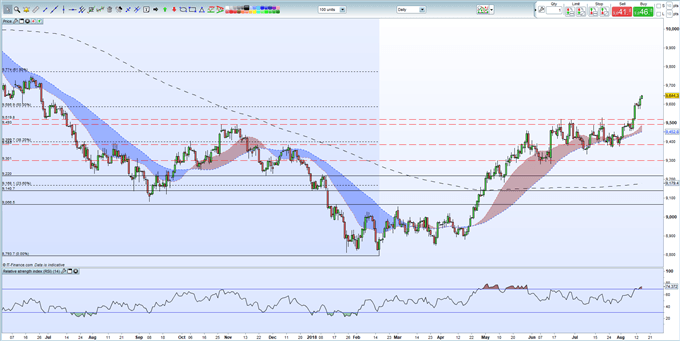 GBPUSD remains under downside pressure with the pair currently at levels last seen in mid-June 2017. Market watchers will now turn their attention to the next round of Brexit talks in Brussels tomorrow. Both sides are aiming for a negotiated deal by October 18, but time is running out and, as yet, neither side has been willing to compromise. UK Foreign Secretary Jeremy Hunt warned recently that a ‘no-deal’ Brexit is becoming more likely, while EU Deputy Negotiator Sabine Weyand recently tweeted that ‘business needs to prepare for a disorderly Brexit’.

The next level of technical support for GBPUSD is the June 21, 2017 swing low at 1.25891. The daily chart shows that GBPUSD is oversold – using the RSI indicator – while retail sentiment provides a mixed trading outlook. IG Client Sentimentshows retail are 72.4% net-long GBPUSD, but recent daily and weekly shifts in sentiment gives us a mixed GBPUSD trading bias.Any good news could see GBPUSD spike sharply higher, while if the current impasse remains, Sterling is likely to weaken further. 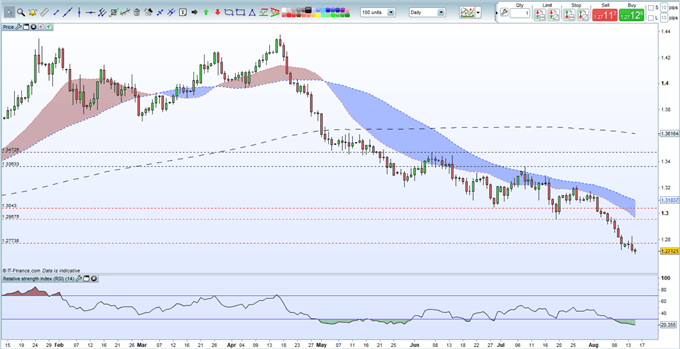