The offshore Chinese Yuan fell against the greenback as local economic data crossed the wires during Tuesday’s session. July’s retail sales y/y clocked in at 8.8%, down from both economists’ forecasts of 9.1% and June’s 9.0%. Rural-excluded fixed assets declined to 5.5% for last month from the prior and expectations of 6.0%. Furthermore, the local jobless rate increased to 5.1% from 4.8%. The underperforming data, which caused the Hang Seng and CSI 300 to immediately fall, could suggest that President Trump’s 25% tariffs on $34b of Chinese imports that went into effect in July negatively impacted Chinese consumers and businesses.

Although the US Dollar pared its gains against its Chinese counterpart later in the trading session, the currency pair has been rising since April 2018. The Yuan’s downturn may have been aided in part by steadily weakening economic activity, which could lead to more monetary policy support on behalf of the state bank. Recently, the People’s Bank of China has taken action in order to quell Yuan selling, initiating a hike in the RRR on foreign exchange forwards and stating that the suspended counter-cyclical factor used to curb excessive selling of the unit may be resumed. 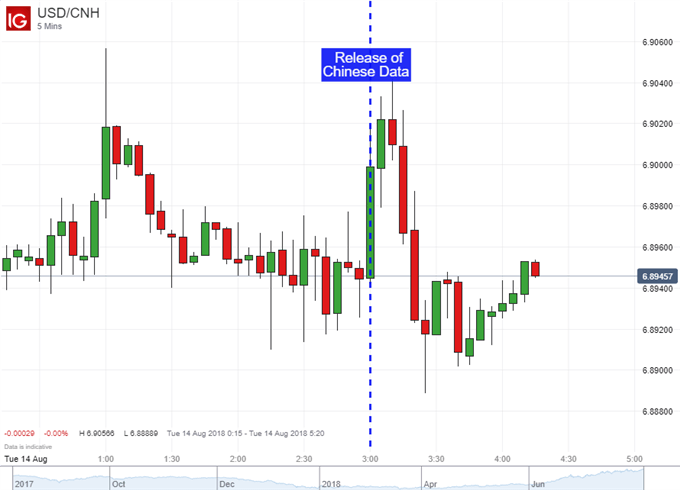 Next, USD/CNH looks to the release of July’s US advance retail sales figures, which is forecasted to decrease to 0.1%, compared to June’s 0.5%. In addition, the US Dollar may make further gains as the risk of financial contagion from banks’ exposure to the Turkish Lira persists. As for the next few weeks, however, a lack of upcoming high-impact American and Chinese economic data puts trade war tensions in the spotlight regarding implications for the currency pair. The tit-for-tat $16b import tariffs both countries have imposed are set to take effect on August 23, possibly causing some volatility.