The Canadian Dollar was easily the best performing major on Tuesday, even surpassing the US Dollar. Its appreciation appeared to be linked to a chain of events rather than one singular update. During the European trading session, CAD rose with crude oil prices which rejoiced in the aftermath of an OPEC report showing an unexpected contraction in Saudi output.

In the US trading session, the greenback rallied as a reduction in Turkey contagion fears improved marketwide mood. After rising over 20% in recent days, USD/TRY headed lower as much as 7% on Tuesday. Stocks rejoiced both in the US and Canada as the S&P 500 and TSX Composite rose about 0.64% and 0.49% respectively.

A strong US Dollar made crude oil relatively cheaper, the commodity relinquished earlier gains. However, CAD still stood strong. This may have been due to comments from Canada’s Finance Minister Bill Morneauseeking topotentially protect their metal industry. Amidst a risk of a surge in steel imports after the US imposed metal tariffs on them, he said that they will apply safeguards if industry harm is shown.

The improvement in sentiment did note bode well for the anti-risk Japanese Yen, and Asia/Pacific benchmark stocks could echo gains from Wall Street. This could further hinder JPY while relatively-higher yielding currencies like the Australian and New Zealand Dollars could rise. The former could even climb further if local wage growth beats expectations, as Australian data has been tending to do so rather lately.

After failing to push above a near-term descending trend line, USD/CAD appears to be heading lower towards the longer-term rising trend line from February. However, clearing it will also involve getting under a range of support (1.2982 – 1.2962) which consists of the July/August lows. A descent through it exposes the next horizontal channel (1.2766 – 1.2729) which is made up of the May lows. 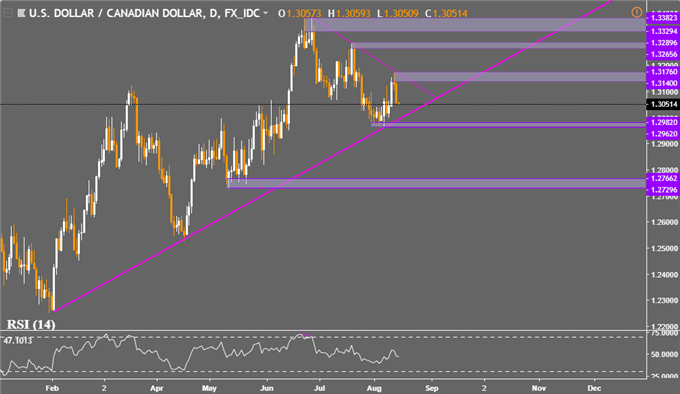 Just getting started trading the Canadian Dollar? See our beginners’ guide for FX traders to learn how you can apply this in your strategy!