Most Asia/Pacific benchmark stock indexes traded higher after Monday’s aggressive selloff that was largely triggered by fears of financial contagion to Turkey. A lack of updates and developments out of the country as the Turkish Lira traded sideways against the US Dollar offered the markets a breather and room for consolidation.

You will find some of the best performing indexes in Japan. The Nikkei 225, led to the upside by all sectors, rallied more than 1.5% and pared most of its gap and losses from yesterday. The ASX 200 edged higher about 0.75% heading into Tuesday’s close, supported by all but the health care and real estate sectors. South Korea’s KOSPI climbed about 0.33%.

Meanwhile, Chinese shares were unable to capitalize on the general improvement in market mood as the Shanghai Composite declined 0.5%. China experienced disappointing retail sales and industrial production statistics for July, the month in which US tariffs on some of their goods went into effect. However, this negativity from the world’s second largest economy failed to meaningfully permeate into nearby stock markets.

As such, the sentiment-linked Australian and New Zealand Dollars were able to capitalize on the improvement in risk trends. The anti-risk Japanese Yen and Swiss Franc on the other hand depreciated across the board. Gold prices, the anti-fiat commodity, bottomed after the US Dollar halted its aggressive ascent over the past few days. This allowed the precious metal to consolidate.

Some emerging market currencies were still feeling the pressure though during Tuesday Asia trade. In particular, the Indonesia Rupiah, Malaysian Ringgit and Philippine Peso edged lower against the US Dollar. This followed a rather poor performance from the MSCI Emerging Markets ETFwhich helped drag down the S&P 500 on Monday. Second quarter foreign direct investment in Indonesia dropped about 13% y/y in dollar terms.

Unless more updates increase Turkish contagion fears ahead, European shares could echo the rather upbeat mood from markets seen during the Asia/Pacific trading session. This may boost stocks and add more momentum to AUD’s and NZD’s ascent. The Euro could rally too, but worse-than-expected Eurozone and German GDP data could cap EUR/USD gains and even send it closer to the May/June 2017 lows.

After breaking below key near-term support, NZD/USD finds itself struggling to push below the 38.2% Fibonacci extension around 0.6588. In fact, the recent improvement in market mood has led the pair cautiously higher. In the event of more market dynamics that could bolster sentiment, the pair may bounce back to the lows which is struggled to push through in the first place. This is around the 23.6% level and May 2016 low (0.6692 – 0.6676). 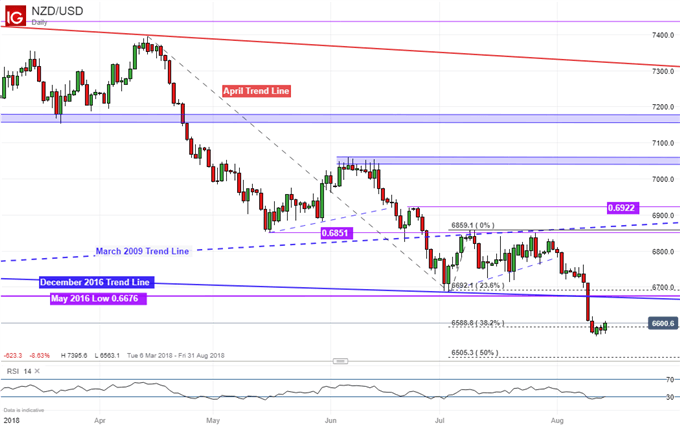