Asian stocks were weaker across the board Monday as investor worries about Turkey cast a cloud over world markets.

The battered Lira was clobbered anew last Friday when US President Donald Trump said he had approved the doubling of metals tariffs against Turkey. That country’s worries have investors casting nervous eyes on emerging-market US Dollar debt generally as US interest rates rise, taking the international cost of Dollars with them.

That said contagion risk is, perhaps seen as slightly less of a worry for Asia, not that that has helped local equity as a new week kicks off. The Nikkei 225 was down 1.8% in the middle of the Tokyo afternoon, with the ASX 200 off by 0.5%. The Hang Seng fell 1.8% and Shanghai was down by 1.7%.

Perceived haven assets were in vogue in the currency space, with the Yen benefitting particularly. However, its strength weighed heavily on the Nikkei’s plentiful export titans. One currency for which Turkish contagion is a big issue is of course the Euro. It wallowed at 13-month lows against the Dollar as investors looked askance at the currency bloc’s major banks and weighed their likely links to Turkey.

EUR/USD has just slipped through the 50% Fibonacci retracement of its rise up from the lows of December 2016 to the peaks of February this year. That came in at 1.1439. The next, 76.4% pullback would be seen a long way down from current levels at 1.1176. 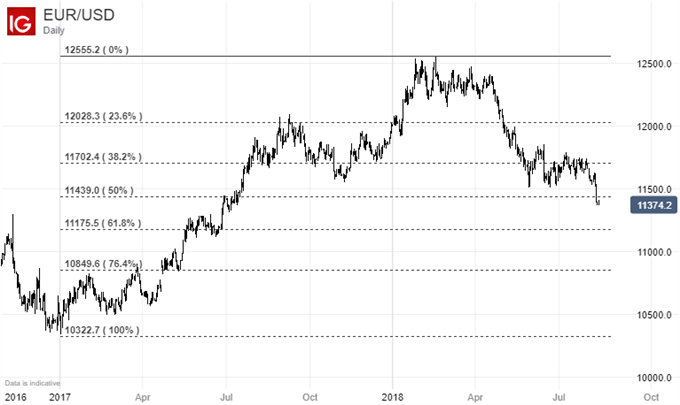 Gold prices were subdued as the Dollar firmed while crude oil prices slipped back on decreased risk appetite, although US sanctions against major producer Iran seem to be underpinning the market now.

The rest of the day offers no first-tier economic numbers, which means current themes are likely to endure through the European and American sessions.