- Headline July US CPI comes in at +2.9% y/y as expected, but the core CPI reading was above expectations at +2.4%, the fastest reading since September 2008.

- The beat on the inflation report comes as rates markets were already pricing in a 92% chance of a 25-bps rate hike next month by the Federal Reserve.

- The US Dollar was able to maintain its breakout from its two-month consolidation, with the DXY Index holding near its daily highs after the inflation report.

After a mostly positive July US Nonfarm Payrolls report last Friday, the US Dollar (via the DXY Index) had been consolidating below key resistance formed around its yearly highs. But on the back of fresh developments out of Europe regarding banks’ exposure to the Turkish economy, and solidified by another hot inflation report, the US Dollar is positioned at its strongest level in a year.

Headline July US CPI held steady at +2.9% y/y as expected, according to a Bloomberg News survey. With average hourly earnings in at +2.7% y/y, real wage growth has been negative in the United States for a third consecutive month. But core inflation was where attention was focused, coming in at +2.4% y/y versus +2.3% y/y expected. This represents the fastest rate of core inflation since September 2008.

The data comes against the backdrop of a Federal Reserve that was almost already certain to raise rates when it meets next month. The data today has had little impact on already rich rate expectations, with September 2018 Fed rate hike expectations pricing in a 92% chance of a 25-bps before the figures were released; after today’s data, the odds are 94%. 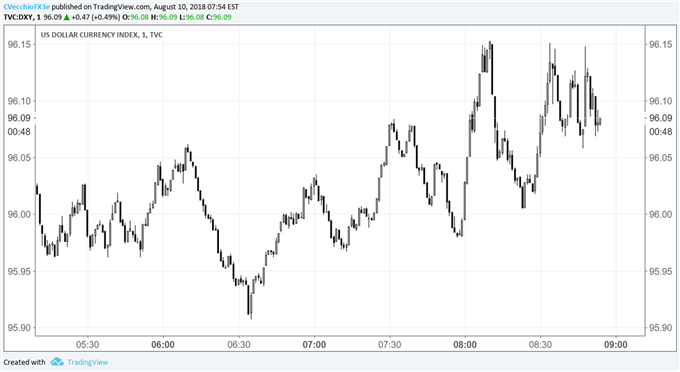 Following the inflation report, the US Dollar was able to sustain its already solid gains on the day. The DXY Index gained from 96.05 to as high as 96.15 following the release, and was trading back at 96.09 at the time this report was written.

Similarly, EUR/USD fell from near 1.1451 to below 1.1439, and USD/JPY gained from near 110.90 to above 111.10 briefly. Focus is likely to quickly return to the new, more potent catalyst on the data, the reaction by the Euro from contagion spreading from Turkish markets.