Trade worries continued to weigh on Asian stocks Friday, with all regional indexes in the red as their respective closes loomed.

Aside from fears about morel venomous commentary on the subject between Washington and Beijing, there was some nervous focus on Japan. Trade talks between that country and the US are due to begin later in the global day, with auto exports especially in the spotlight. This week has already seen China announcing retaliation for the latest round of US tariffs, and the issue seems likely to dog financial market trade for some time to come.

The Nikkei 225 was down 0.5% in the middle of the Japanese afternoon. Australia’s ASX 200 was down by 0.1%, with Shanghai and Hong Kong stocks also lower, along with the Kospi in Seoul.

The US Dollar made gains, rising to 13-month peaks against a basket of its most widely traded peers. The Turkish lira was clobbered anew as markets expressed ongoing concerns about governance in Ankara. However, the Japanese Yen gained on the greenback, probably as investors moved into perceived haven assets when stocks wilted.

On its daily chart, USD/JPY remains below the uptrend channel which had bounded trade until the start of this week. 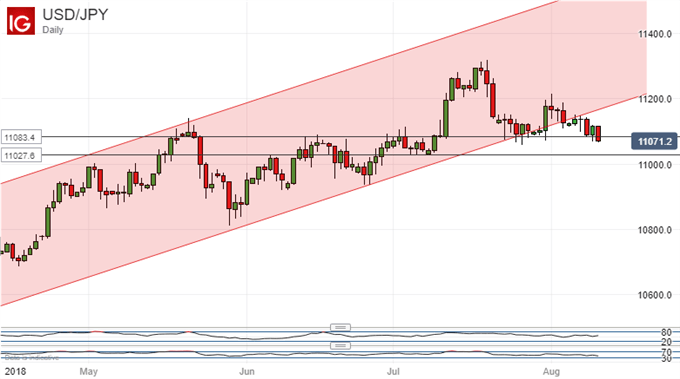 Its fall seems to have stalled at least for the moment at a cluster of resistance levels going back to late June and early July. However, focus remains clearly to the downside until market risk-appetite returns, something it’s unlikely to do sustainably while investors are worried about the next trade headline.

Friday still offers investors plenty of economic meat to chew over. There’s a huge amount of UK data on offer, led by official Gross Domestic Product figures. Canada’s employment numbers are coming up too, but the main event is likely to be the release of US inflation levels for July