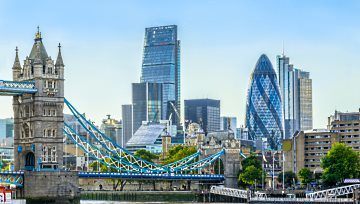 GBPUSD bulls are currently in control of the market and pushing the pair back up to short-term resistance levels after weeks of selling. GBPUSDtoday hit a near one-year low of 1.2842 but then bounced higher after a report in The Times hinted that the EU may shift its previously rigid stance on EU goods trade and freedom of movement. The Times report said that ‘European leaders are preparing to negotiate a deal that would let Britain remain in the single market for goods while opting out of free movement of people’. While this would still fall short of the UK’s Brexit demands, any easing of tensions would provide short-term relief for an increasingly weak Sterling complex.

The one-hour GBPUSD chart shows a sharp rebound from today’s low and the pair are now pushing into the 20- and 50-day cloud. A break above here would leave a short-term target range between 1.29125 and yesterday’s double top at 1.29605.

The daily GBPUSD chart continues to point to lower prices in the medium- to long-term as overriding Brexit fears continue to rattle investor’s confidence. The pair are also being driven by a strong US dollar where buyers continue to buy any sell-offs. The third 0.25% US rate hike of 2018 is fully expected when the FOMC meet in September while an additional rate rise is nearly fully priced in for the December meeting. GBPUSD may find support at the August 2017 swing low at 1.27738 while the RSI indicator is touching oversold territory and should act as a brake on any further sharp falls.