Asia/Pacific benchmark indexes were rather mixed heading into Thursday’s close. The Nikkei 225 headed cautiously lower, dragged down partially by automakers. Japan and the US are due to start trade talks later today. However, some of the pessimism in local shares could yet be reversed. Japan may escape the worst of punishment from the world’s largest economy given that it is its strategic partner and ally.

South Korea’s KOSPI also headed cautiously lower while Australia’s ASX 200 rose more than 0.6%. The latter was led higher by financials. Chinese indexes soared with the Shanghai Composite rallying more than 1.7%. It was boosted by information technology which echoed similar gains from tech shares on Wall Street in the prior session.

The sentiment-linked Australian Dollar edged higher against its major counterparts as Chinese benchmark indexes rallied. Meanwhile, the New Zealand Dollar remained under pressure in the aftermath of a dovish RBNZ monetary policy announcement and commentary from Governor Adrian Orr. The anti-risk Yen initially headed higher but the rise in equities towards the latter half of the Asian session cooled its ascent.

Ahead, the Philippine Peso will look to an interest rate announcement from the Bangko Sentral ng Pilipinas (BSP). Heading into this event, Philippine GDP fell to 6.0% y/y in the second quarter from 6.8% in the first. Markets were expecting growth to slow down to just 6.6%. This was the slowest pace of economic expansion in three years and PHP weakened against the US Dollar on the update.

With local inflation running at its highest since 2009 (+5.7% y/y), this presents an interesting situation for the Philippine central bank. The markets are expecting a 50 basis point rate hike as inflation continues heading further and further away from the BSP’s target. The central bank may deliver a hawkish tone which could reignite the Peso. But at the same time, rising interest rates can bode ill for growth. If things head in the wrong direction, the country could head for stagflation (high CPI and low GDP).

On a daily chart, USD/PHP appears to be trying to make a push higher above near-term descending resistance. This was after testing the May highs around 52.93 which seems to have established itself as new support.

A relatively hawkish BSP could see USD/PHP getting back under the resistance line and resulting in a potential false breakout. On the other hand, prices may continue rising until they test 53.30 which is horizontal support that held up the pair for most of June and July. It can become new resistance next. 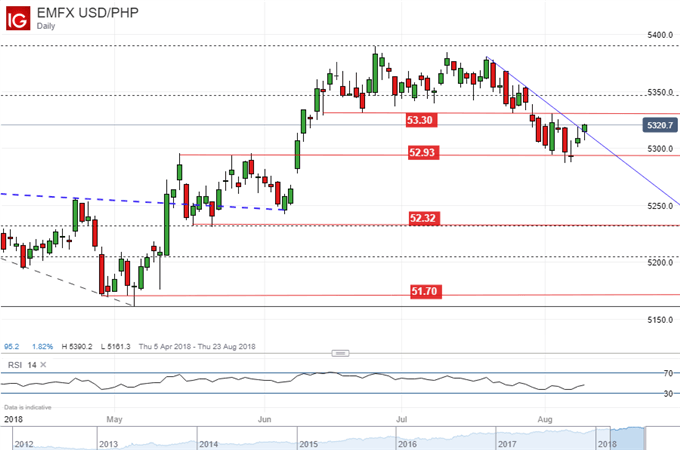