China tends to hog the headlines when it comes to the US administration’s efforts to level what it sees as a scandalously skewed trade playing field, but there is one other ostensible sinner in East Asia: Japan.

The world’s third-largest economy also runs those persistent trade surpluses with the US which the White House now finds so hard to stomach. For its part, Japan has already complained to the World Trade Organization about US tariffs on imported steel and aluminum but these are relatively small beer. What would really matter would be punitive trade barriers raised against Japan’s flagship industry: automobiles. And there’s some chance that they will be.

It is perhaps worth pointing out at this stage that nothing the US has done to try and stymie that industry has stemmed the vast erosion of domestic market share to Japan over the past four decades. With that in mind, it seems unlikely that another attempt will work now.

But in any case, there are reasons to suppose that Japan will escape the worst of any US punishment beatings. For Japan, unlike China, is a strategic partner and ally of Washington. Japan will never challenge US dominance in the Pacific, never mind in the broader world, dominance Tokyo in any case broadly supports and facilitates. Japan may have snuggled-up to the European Union in the face of Donald Trump’s tariffs, but ultimately Tokyo and Washington will have to find common ground.

There is only so hard you can kick a strategic partner. Bilateral talks will take place this week between Japan and the US, and a more accommodative stance may well be the outcome.

Moreover, as far as foreign exchange trade goes, it’s tempting to suggest that the Japanese Yen simply has more pressing worries. To date is seems barely to have been impacted at all by trade-spat headlines. It occasionally performs its customary haven role, seeing knee-jerk, short-lived buying whenever the rhetoric between the US and Beijing gets especially heated.

But USD/JPY remains in an impressive uptrend. It has been in place since late March and the reasons for it seem as strong as ever if not stronger. The Federal Reserve remains committed to raising interest rates for as long as the economic data make such a course plausible. Meanwhile the Bank of Japan endlessly grapples with low inflation and pledges to keep its own monetary settings ultra-loose until it picks up.

This is not an environment in which the market will sell USD/JPY for very long, whatever may occur on the trade front. Those intermittent bouts of haven buying may see the Yen post fleeting gains, but in all but the most gloomy of trade-war scenarios, the yawning interest-rate differential between the US and Japan will remain the pair’s main driver. 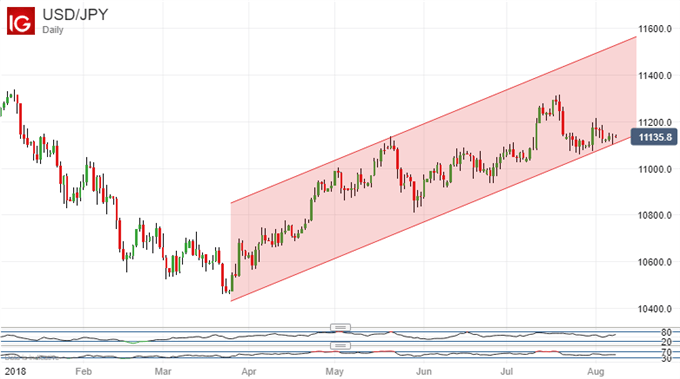