The New Zealand Dollar rallied and subsequently fell against its US counterpart after the Reserve Bank of New Zealand Governor Adrian Orr spoke publicly following the release of the official cash rate. Governor Orr stated that global inflation pressures are starting to rise and that he sees unemployment declining towards 4% over the forecast period. He also added that the NZD’s lower exchange rate will boost exports, and that it is very close to fair value.

However, the currency pair continued its downtrend when the central bank’s head went on to say that if growth slows further below potential, the RBNZ would cut the OCR and that weak inflation may keep the rate low for longer. The decision to maintain the official cash rate at 1.75% was widely expected, and caused NZD/USD to sharply fall, erasing the Kiwi Dollar’s slight rebound earlier today and leaving the currency at its lowest level since May 2016 In addition to the OCR decision, the RBNZ cut its 2Q 2018 growth forecast from 0.8% to 0.5%. It also noted that the next rate decision may be either a cut or a hike, keeping in line with its remarks from July’s meeting. 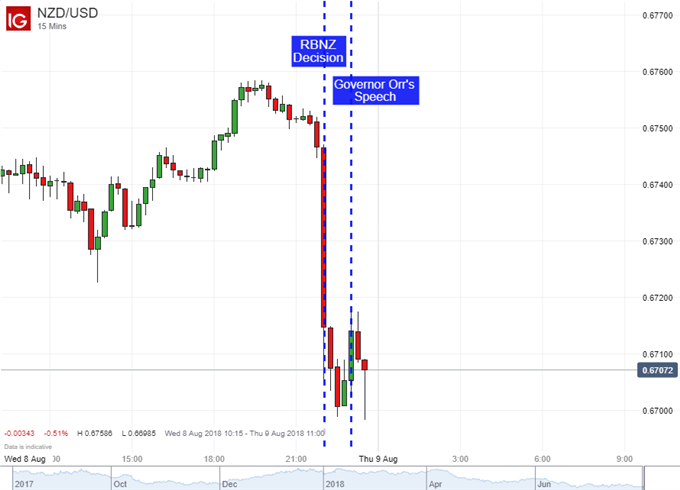 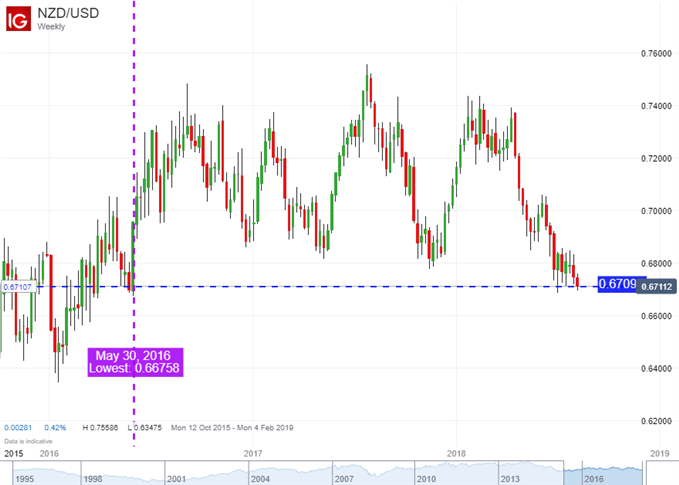 See our free guide to learn what are the long-term forces driving New Zealand Dollar prices!

Looking ahead, the Kiwi Dollar may fall in response to economic data later this week, following the release of local housing and manufacturing PMI figures. In addition, forecasted strong inflation numbers from the United States may lead the New Zealand Dollar to continue depreciating against the greenback. Furthermore, trade war tensions continue to weigh on risk appetite for the sentiment-linked unit. China’s state media announced that Apple may be the next target in the US-China trade war, possibly harming global supply chains and boding ill for equities.