Join a free Trading Q&A webinar and have your questions answered about the Australian Dollar and comments from RBA Governor Philip Lowe!

Mr. Lowe noted that we should expect inflation to rise and be close to 2.5% by 2020. He also reiterated that the next rate move would be up if the outlook ‘stays favorable’. But before RBA hawks could get excited, Lowe added that he still sees no strong case for a near-term monetary policy adjustment. With that in mind, rate hike bets seemed unaltered as Australian front-end government bond yields remained unchanged.

Even so, the Australian Dollar may have benefited from Chinese trade balance statistics which were released at the time of Lowe’s speech. In Dollar terms, net exports clocked in at $28.05b in July versus $38.92b expected. Meanwhile, imports rose 27.3% y/y versus 16.5% anticipated. Exports climbed 12.2% versus 10.0% seen. Keep in mind that this was the first month in which the US imposed tariffs on China imports.

The surge in imports could have positive knock-on effects for Australia’s economy given that China is their largest trading partner. Even so, the RBA remains patient before adjusting rates. Ahead, the Australian Dollar could benefit from Wednesday’s RBNZ monetary policy announcement. There, a relatively dovish central bank could hurt the New Zealand Dollar and boost AUD given that the latter is a substitute for it from a yield perspective. 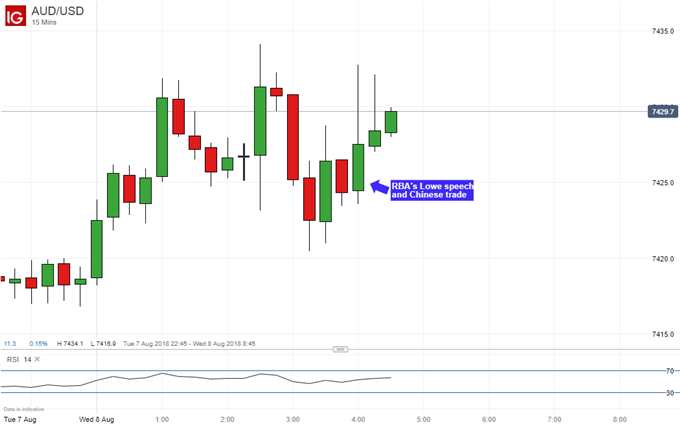 Looking at the bigger picture, the Australian Dollar remains in consolidation mode against its US counterpart and it has been since mid-June. There was a push above near-term descending resistance, but AUD/USD’s range between 0.7481 and 0.7315 is still in play. 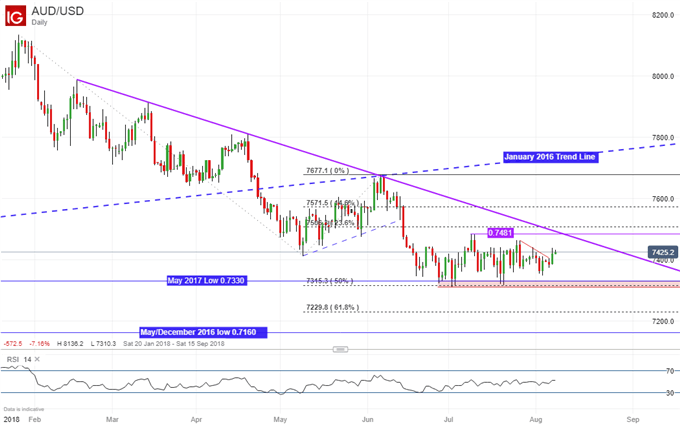