Crude Oil Analysis: Oil Gains as US Reinstate Sanctions on Iran, What Next?

Today marked the end of a 90-day wind period leading to the US re-imposing the first round of sanctions at 1201EDT against Iran after the US withdrew from the nuclear agreement back in May. These set of sanctions are related to transactions with US Dollar banknotes, trade in precious metals and transactions related to the Iranian Rial and sovereign debt. A second round of sanctions will be imposed on Iran’s oil sales and energy sector after the end of a 180-day wind down period on November 4th.

Oil prices are notably firmer following renewed sanctions on Iran, with Brent back above $74/bbl. However, gains so far this morning have been modest at best. One of the reasons is due to the fact that China who is the largest buyer of Iranian oil have agreed to maintain current import levels (700kbpd) instead of listening to US demands to reduce purchases to zero by November. Elsewhere, the EU are looking to protect European companies who do business with Iran by putting in place a blocking statute which has taken effect.

Supply loss will be a key driver in oil prices in the near term with many asking the question on how much Iranian oil will be lost before the sanctions in November take effect. Some analysts suggest that the drop in Iranian exports may lead to 600k-1.5mbpd being taken off the market. As such, headline risk will remain high as countries will look to comply with US guidance. As a reminder, back in June, the second largest importer of Iranian oil, India, had asked refiners to prepare for a drastic reduction or zero imports from Iran by November. 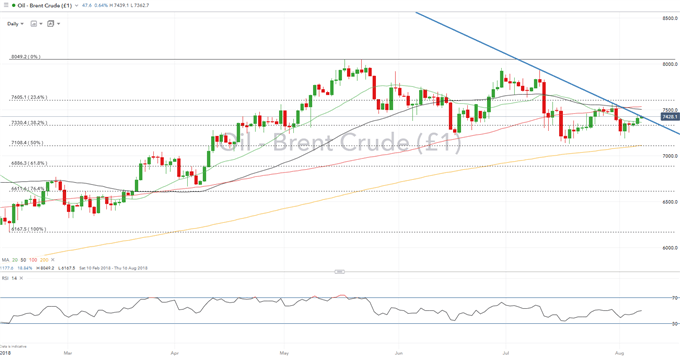 Brent crude prices have run into resistance in which the descending trending from the July peak has curbed further upside for now. A break above could see a move towards $75.10. Near-term support is situated at $73.30, which has been defended in the last couple of sessions.

We typically take a contrarian view to crowd sentiment, and the fact traders are net-long suggests Oil - US Crude prices may continue to fall. Positioning is less net-long than yesterday but more net-long from last week. The combination of current sentiment and recent changes gives us a further mixed Oil - US Crude trading bias.