The DailyFX Third-Quarter Fundamental and Technical Forecasts are out now.

Asian stocks managed gains for the most part on Tuesday. There were no new headlines from the trade spat between China and the US to cloud sentiment and buyers seem to have taken advantage of this to track US mainboards higher.

The Nikkei 225 added 0.6%, with the Shanghai Composite up by 1.3% and the Hang Seng adding 0.9%. The ASX 200 was the most notable regional laggard. It shed 0.4% as falls for raw materials and telecoms weighed. However the Sydney equity benchmark remains quite close to ten-year highs nevertheless and, moreover, looks quite relaxed there too from a technical perspective.

The US Dollar was broadly steady overall although it gained once more against the British Pound. GBP/USD slipped as markets continued to fret about the possibility of a ‘no deal’ exit for the UK from the European Union. 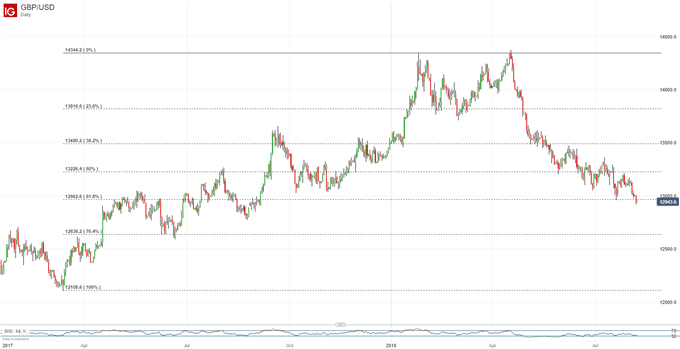 It is at lows not seen since September 2017 and has been falling consistently since mid-April as Brexit worries have mounted.

The Reserve Bank of Australia’s decision to leave interest rates on hold at their record low of 1.5% failed to move the Australian Dollar as it was universally expected. This unchanged rate is now two years old, the last cut having come in August 2016

Crude oil prices were mired as investors looked towards new, looming US sanctions against Iran. Gold prices rose slightly through the Asian session.

Still awaiting investors on Tuesday’s data slate are US employment data from the Job Openings and Labor Turnover Survey (JOLTS).