The Australian Dollar gained slightly against its US counterpart after the Reserve Bank of Australia announced that it would leave its overnight cash rate unchanged at 1.50%, a record low. The rate announcement failed to significantly impact the currency pair, which has been consolidating since mid-June. In addition to the OCR decision, the RBA noted that the unchanged policy is consistent with sustainable economic growth, and that low rates continue to support the local economy. It also added that it expects inflation to be higher than the current 2.1% in 2019 or 2020. 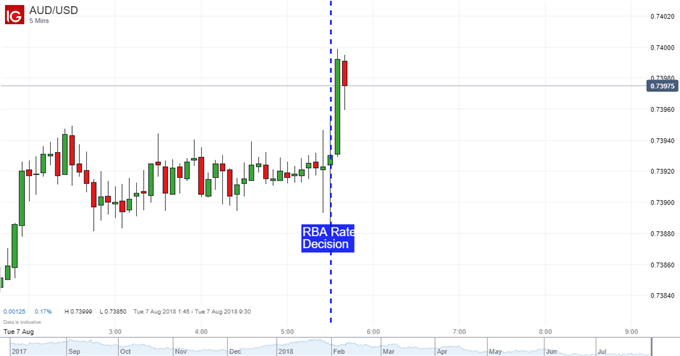 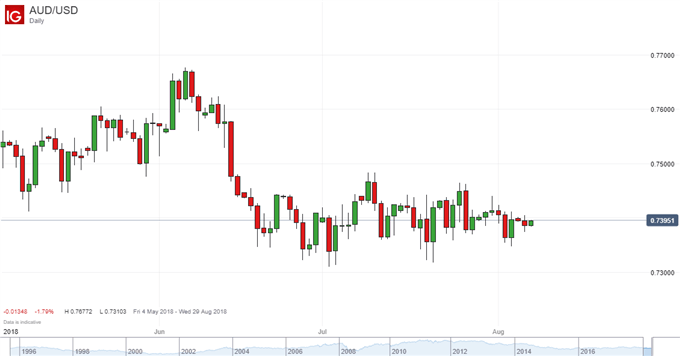 The central bank’s decision to hold its rate steady was widely forecasted, as it has consistently promoted a wait-and-see approach to monetary policy. In fact, overnight index swaps do not price at a better-than-even chance (90.7%) of a rate hike until August 2019. The Australian Dollar may pave its next move following forward guidance from Governor Philip Lowe’s speech on Wednesday.

However, the risk-on currency is likely to find more traction from the RBNZ rate decision later this week. Unlike the RBA’s prior stances, the New Zealand central bank has indicated that its next move may be either a hike or a cut. Recent lackluster New Zealand CPI and employment data could influence rate policy bets in a dovish direction, possibly leading AUD to gain as an alternative to NZD.

See our free guide to learn what are the long-term forces driving Australian Dollar prices!

Looking ahead, the persistent threat of trade war escalation continues to cloud equities, possibly boding ill for the sentiment-linked Australian Dollar. Over the weekend, China announced that it will levy tariffs on approximately $60b of American goods if Trump implements plans of taxing an addition $200b of Chinese products. In addition, National Economic Council Director Larry Kudlow stated that the United States has more ammunition than China in a trade fight, further fueling trade war tensions.