See our Q3 EUR forecast to learn what will drive the currency through the quarter.

EURUSD saw a close below 1.1575, which now opens up a potential move towards the 2018 low (1.1508). Alongside this, the 12-day momentum remains negative, consequently reinforcing the bearish sentiment in the pair, while trend signals are also moving lower. Bids at 1.1550 has curbed further selling in the spot rate, however, as the price continues to dip, demand for Euro puts (protection against further declines) have increased. 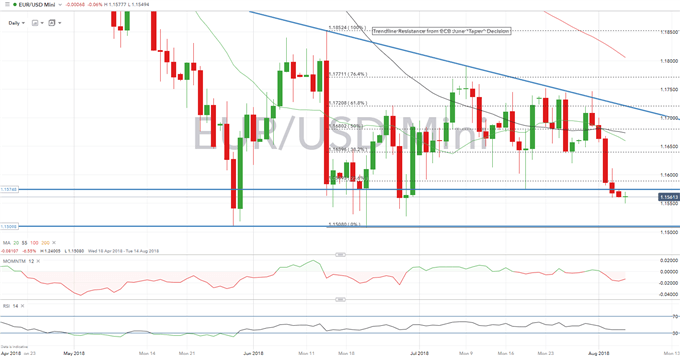 Another set of soft German factory orders with the figures missing expectations for the fifth time in the past six months. The headline reading fell sharply lower by 4%, expectations were for a slight dip of -0.4%, while this also marks the largest fall since January 2017. However, these figures are for June which is slightly outdated given that this was prior to Trump’s and Juncker’s agreement to refrain from imposing auto tariffs.

Eurozone Sentix Investor Confidence rose for the second consecutive month to 14.7 in August, which came ahead of expectations of 13.5 as concerns of a full-blown trade war between the US and EU had eased. Largely this was due to the aforementioned agreement between Trump and Juncker, consequently, the sub-index measuring future expectations had improved, however, does remain in negative territory. Sentix stated that Germany, whose auto industry has the most to lose from US auto tariffs, is the biggest winner from easing trade tension, which has been reflected in the index for Germany, showing a bounce back in August to hit the highest level since May.