Asian stocks were mostly higher Monday, seeming to shrug off now ever-present trade tensions. US President Donald Trump suggested on Sunday that America was winning a trade war with China, but Beijing has threatened retaliatory tariffs on $60 billion of US imports.

Still, regional equity markets appeared to focus rather on last week’s Wall Street gains, which came in turn on earnings optimism. The Nikkei 225 was up 0.2% in the middle of the Tokyo afternoon. Australia’s ASX 200 was in the green to the tune of 0.5%, with its plentiful mining names given a lift by higher iron-ore prices. The mainboards of Hong Kong and Seoul also looked perky with only the Shanghai composite betraying possible trade nerves- it was off by 0.7%.

The US Dollar was steady against major peers. There was no first-tier Asian economic data to move foreign exchange markets. However, last week’s news of a fall in the US employment rate – despite forecast-missing job creation- still seems to be underpinning the greenback.

Crude oil prices gained, reportedly as markets looked to forthcoming details of new sanctions against major producer Iran. Gold prices inched higher through the session. The oldest haven’s prices have been falling steadily since April and are now back very close to lows not seen since July 2017. Rising US interest rates have weighed steadily on non-yielding gold, with trade tensions so far apparently providing it with little support. 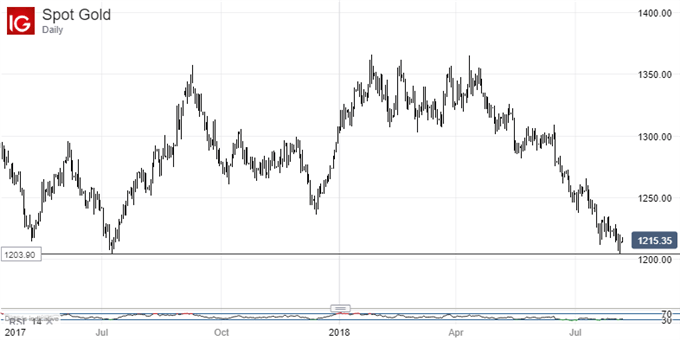 Still to come on what is admittedly a very light data slate Monday is the Purchasing Managers Index from Germany’s construction sector and a look at Eurozone investor confidence. The schedule will be more crowded as the week progresses, however, with interest rate decisions due from both Australia and New Zealand among the likely highlights.