The US Dollar pared its gains from the Asian/European session during the second half of Friday trade. Intervention from the PBOC to take counter cyclical measures to stabilize the Yuan sent USD/CNH considerably lower. Shortly after, China then announced it will levy differentiated tariffs on about $60b in US goods if Trump proceeds with plans to impose additional $200b taxes of Chinese goods.

Equities around the world quickly fell on the news. Afterwards, National Economic Council Director Larry Kudlow said that they have more ammunition than China in a trade fight. He also added that the US and EU will have a united front against the world’s second largest economy. Despite the provocation in trade tensions, by the end of the day the S&P 500 traded higher and rose 0.54%.

In fact, other stocks also rose in the aftermath. It seems that the markets found relief from more upbeat US earnings. The sentiment-linked Australian Dollar outperformed, largely boosted by the PBOC when the US Dollar declined. It had more room to rally afterwards when stocks regained upside momentum and the greenback fell again on worse-than-expected ISM non-manufacturing PMI after a mixed jobs report.

Meanwhile, the anti-risk Japanese Yen appreciated versus most of its major counterparts. The majority of the gains occurred following PBOC’s intervention. Gold prices, which tend to move inversely to the US Dollar as an anti-fiat asset, rallied. Crude oil prices also fell along with the deterioration in market mood. The Canadian Dollar also got a slight boost when Mr. Kudlow said that Canada will perhaps join in on NAFTA negotiations.

A Look Ahead – Eyes on Nikkei 225, Trade War Fears

A quiet economic offering during Monday’s Asia/Pacific trading session places risk trends as the key driver for markets. Japanese shares could be at risk of echoing the partial deterioration in sentiment from Friday’s US trading session. This could further lift the Yen at the expense of commodity currencies like the Australian Dollar. The New Zealand Dollar may temporarily swing on NZ’s Treasury publishing monthly economic indicators. But traders could be hesitant to take NZD direction bets ahead of this week’s RBNZ rate announcement. 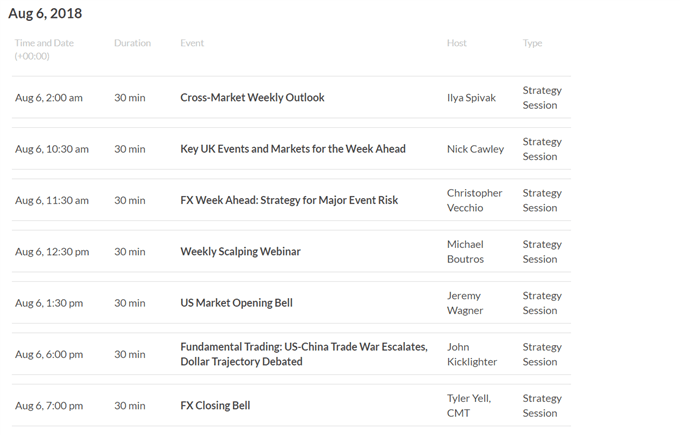 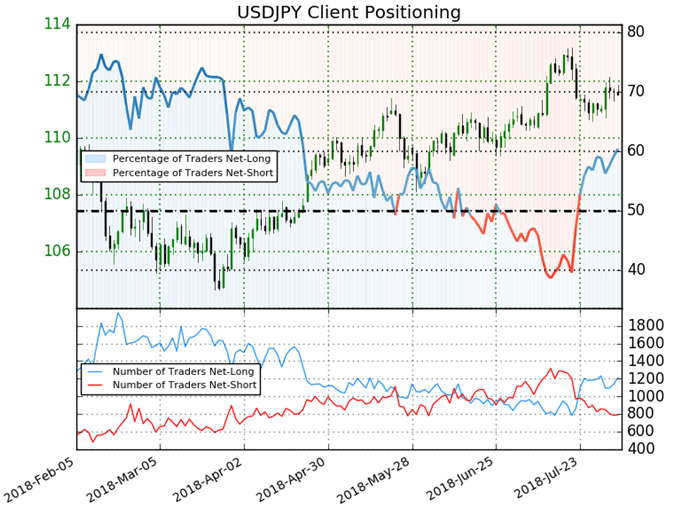 Retail trader data shows 60.4% of USD/JPY traders are net-long with the ratio of traders long to short at 1.53 to 1. In fact, traders have remained net-long since Jul 23 when USD/JPY traded near 111.374; price has moved 0.1% higher since then. The number of traders net-long is 3.9% higher than yesterday and 1.1% lower from last week, while the number of traders net-short is 4.6% lower than yesterday and 12.8% lower from last week.