- Headline jobs growth comes in at +157K, but the unemployment rate dropped to 3.9%.

- The US Dollar initially dropped but soon turned higher following the data, with the DXY Index rising from as low as 94.99 to as high as 95.23, at the time this report was written.

The US economy continues to chug along at a steady pace, as evidenced by another solid jobs report for the month of July. While the headline came in below expectations of +193K at +157K, the rest of the report was good enough to pick up the slack. After all, according to the Atlanta Fed’s Jobs Calculator, the US economy only needs to add on average +106K jobs per month over the next year in order to keep the unemployment rate at 4.0% or lower.

Indeed, with the headline jobs growth coming in above the +106K required to keep the unemployment rate on hold or lower, the U3 reading dipped to 3.9%. Concurrently, the broader gauge of unemployment, the U6 rate, came in at 7.5% from 7.8%.

Other aspects of the report were also in the ‘steady as she goes’ category. Wage growth remained at +2.7%, a pace seen frequently in recent months. But with headline CPI now at +2.9%, there is evidence that real wages have turned negative, a potential problem for consumers in the second half of the year. If anything, the lack of real wage growth speaks to the necessity behind the Federal Reserve’s desire to raise rates again.

Following the release of the data today, Fed funds futures were pricing in a 90% chance of a 25-bps rate hike in September and a 64% chance of a fourth and final hike in 2018 in December. 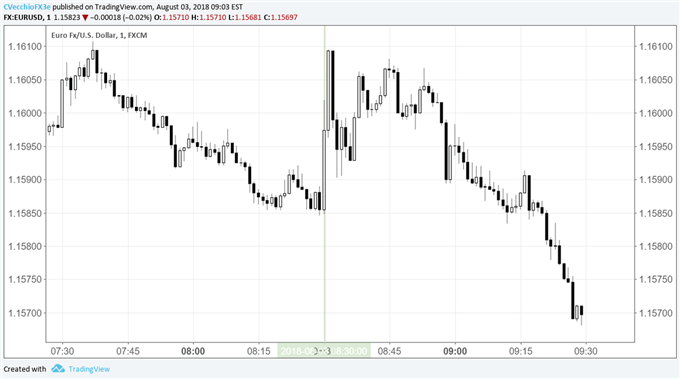 Immediately following the data, the US Dollar traded lower versus the Euro and the Japanese Yen, with the Dollar Index (DXY) dropping from 95.15 to as low as 94.99 in the wake of the report. However, by the time this report was written, the US Dollar had recouped all of its losses and then some. EUR/USD, which traded as high as 1.1609 after the release, was down at 1.1570 at the US cash equity open.