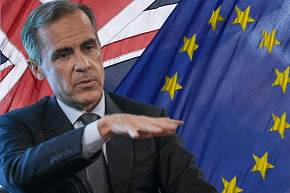 For a more in-depth analysis on Sterling, check out the Q3 Forecast for GBP/USD

Yesterday the Bank of England increased the bank rate to 0.75%, as expected. Although the vote split had taken many by surprise with all rate setters in favour of raising the bank rate. However, following the accompanying comments and post rate decision speech by Governor Carney, the Pound fell to session lows with Brexit risks appearing to be the dominant factor for the currency.

Governor Carney highlighted his unease over Brexit risks, after stating that the possibility of a no-deal is uncomfortable high at this point, adding that the UK and EU should do all things to avoid a no-deal Brexit scenario. As a reminder, yesterday’s minutes noted that difference Brexit responses could significantly alter monetary policy. Consequently, following Carney’s slightly cautious rhetoric, GBPUSD dipped below 1.30, reaching its lowest level in 2 weeks.

UK Services PMI had missed expectations, having dropped to a 3-month low of 53.5 (Exp. 54.7). As such, this brings into question the reason as to why the BoE hiked, given that UK economy remains in the slow lane. IHS market noted that job creation was at the slowest pace since August 2016, which in turns suggests that the unemployment rate has potentially hit a floor. Subsequently, this suggests that faster productivity would be needed for stronger wage growth as opposed to an even tighter labour market and with business investment showing signs of dipping, wage growth may continue to underperform BoE estimates. 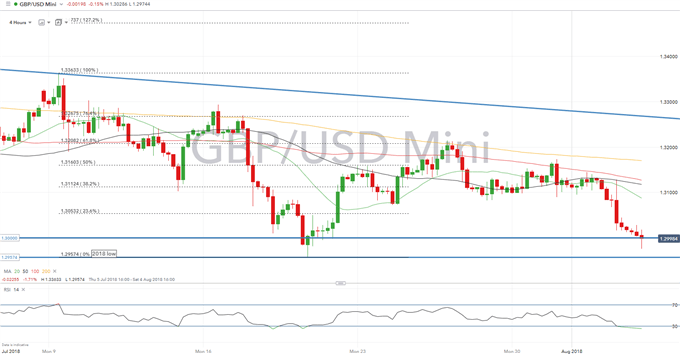 GBPUSD continues to remain fundamentally weak. 1.30 is holding for now, despite a brief dip below. Eyes will be on the 2018 at 1.2957, which will offer support before the psychological 1.2950. A close below 1.30 would be needed to pave the way for deeper losses.