Asia/Pacific benchmark indexes traded mostly unchanged from Thursday’s session, failing to benefit from a recovery in risk appetite on Wall Street where Apple Inc. shares led the NASDAQ Composite higher. Equities traded rather quietly amidst a lack of updates on trade wars. However, from a weekly performance perspective, most of them experienced losses by the end of it.

One of the worst performing indexes was the Shanghai Composite (it was little changed on Friday) which headed for a weekly loss of about 3.67%. Following that was South Korea’s KOSPI which was down about 1.08% by the end of the week. Although it traded higher on Friday, rising 0.59% alongside chemicals. Australia’s ASX 200 and Japan’s Nikkei 225 were lower about 0.97% and 0.88% by the end of this week.

The quiet performance in stocks during Friday’s Asia/Pacific trading session also echoed into the FX spectrum. Only the New Zealand Dollar experienced cautious losses against its major peers. The currency may have still been under pressure following this week’s softer jobs report and traders may have been taking bets ahead of next week’s RBNZ monetary policy announcement.

Meanwhile, the Australian Dollar headed slightly higher. The currency managed to gain a little in the aftermath of better-than-expected local retail sales data which clocked in at 0.4% m/m in June versus 0.3% seen. However, in the bigger scheme of things, AUD/USD still remains range bound since mid-June. A catalyst that could bring it close to a break will present itself over the remainder of this week.

That will be July’s US employment report. There, the country is expected to add 193k jobs while the unemployment rate ticks down to 3.9% from 4.0%. Average hourly earnings should increase at 2.7% y/y again. Lately, US economic news flow has been tending to slightly underperform relative to economists’ expectations. With the markets more interested in wage gains, a small miss there could send the US Dollar lower.

We released our 3Q forecasts for equities, US Dollarand the Japanese Yen in the DailyFX Trading Guides page

On a daily chart, the ASX 200 appears to have broken below a near-term rising support line. This could pave the way for a reversal of its dominant uptrend since June. Near-term support is the 23.6% Fibonacci retracement at 6,239. A break below that reveals also a small channel of support from June. On the other hand, near-term resistance appears to be the 14.6% minor level at 6,274. 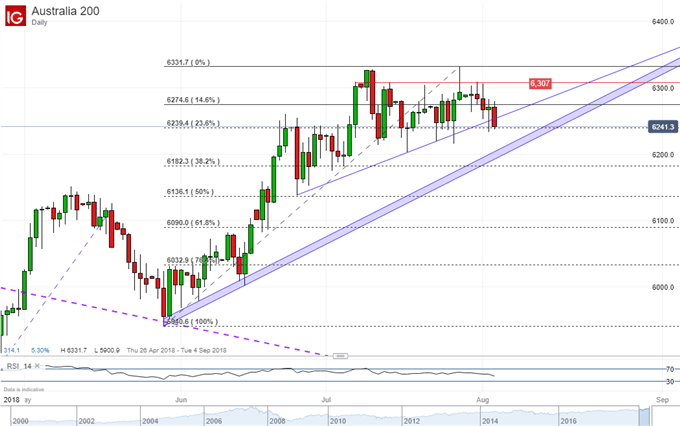 ASX 200 and other equities Trading Resources: