Trade Wars in Focus for the Nikkei 225, Fed Offers Little to USD

August’s Fed interest rate announcement failed to offer a meaningful reaction for the US Dollar. In fact, while the greenback edged cautiously higher against its major peers on Wednesday, most of the gains seemed to be secured thanks to prepositioning for the event. In the central bank’s statement, the most adamant change was that economic activity was noted rising at a ‘strong’ rate instead of a ‘solid’ one from back in June.

Additional Comments from the Fed:

Rates were left unchanged between a range of 1.75% - 2.00% with another increase anticipated in September. Meanwhile, expectations for a second hike afterwards by 2019 aren’t quite yet fully priced in and it seems that the central bank had underwhelmed those who were looking for more hawkish guidance. Nevertheless, the strength in the US Dollar weighed against similarly high-yielding currencies like the Australian and New Zealand Dollars.

Meanwhile, the markets seemed to have brushed off more trade war developments. Shortly after the US session ended, US President Donald Trump tasked trade officials to consider raising tariffs on $200b in Chinese goods. This would involve a tax of 25% instead of 10%. However, this was already anticipated from yesterday’s leak. In fact, S&P 500 futures and the Nikkei 225 edged cautiously higher in the aftermath of this development.

The markets may have focused on a small detail in the official report that seemed more welcoming. According to US Trade Representative Robert Lighthizer, the country has not yet decided on tariffs on $16b of Chinese goods. If you recall, this is the second portion of the original $50b gross amount, $34b of which has already been enacted. Signs that the second half could be hold off in the interim while the US remains open to negotiations with China could be better for sentiment and thus the Nikkei 225 or S&P 500 for now.

With that in mind, a Fed that held off from appearing too hawkish and a cooling in near-term trade war fears could bode well for Asia/Pacific shares ahead. This may allow the anti-risk Japanese Yen to weaken while the sentiment-linked AUD and NZD rise. The former could see some short-term volatility on net export data that on balance, seems unlikely to increase RBA rate hike expectations given their monetary policy stance. 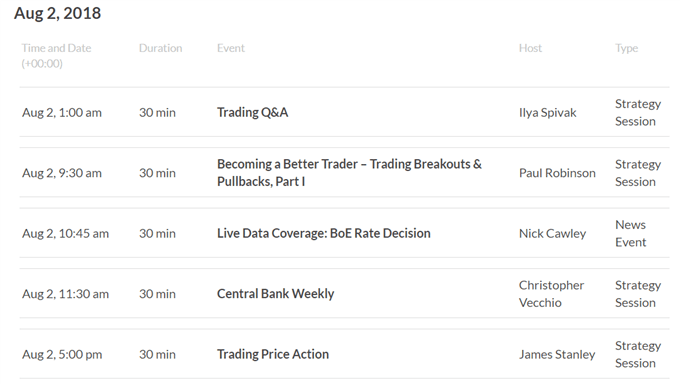 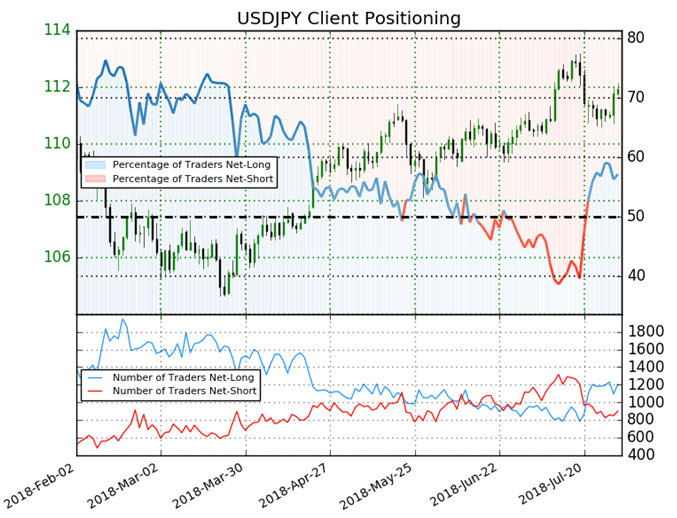 Retail trader data shows 57.2% of USD/JPY traders are net-long with the ratio of traders long to short at 1.33 to 1. In fact, traders have remained net-long since Jul 23 when USD/JPY traded near 111.374; price has moved 0.5% higher since then. The number of traders net-long is 3.3% lower than yesterday and 5.4% lower from last week, while the number of traders net-short is 15.9% higher than yesterday and 5.1% lower from last week.