How Might the Bank of England Vote and Importance for GBP

Bank of England Analysis and News

The Bank of England are set raise rates by 25bps to 0.75% with OIS markets attaching a 90% probability. As such, with a hike near enough fully priced in, one of the focal points will be the vote split, which can be important for the reaction of GBP. A bullish scenario for the Pound would be a 9:0 vote in favor of raising rates, while a bearish GBP scenario would be a 5:4 vote in favor of a hike and neutral scenario is a 7:2 vote split. 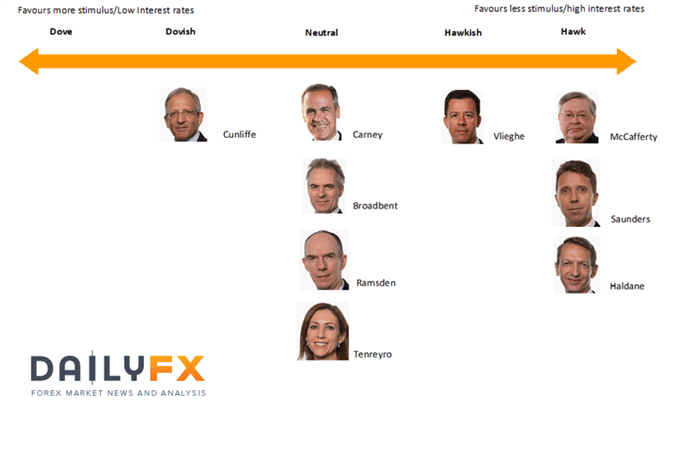 Ian McCafferty (Hawk): McCafferty is one of the most hawkish members on the committee, who has voted to raise rates at the past 3 meetings. It is likely that today will be no different with the rate setter stating that the BoE should not dally in raising rates. Most importantly, this will be Ian McCafferty’s last meeting as a BoE rate setter.

Michael Saunders (Hawk): Another very hawkish member similar to that of McCafferty, Saunders will also likely vote for a hike today, as was the case in the past 3 meetings. Michael Saunders most recently stated that the softness in Q1 GDP was due to temporary factors and adverse weather conditions.

Andy Haldane (Hawk): The Chief Economist surprised many at the last meeting by voting for a hike, as such, his typically neutral stance switched to hawkish action. Haldane stated that weakness in Q1 prevented him from voting to raise rates in May, however his view is that the economy is turning around while the Chief Economist also noted that lifting rates would still leave monetary conditions at extraordinary levels.

Gertjan Vlieghe (Hawkish): Vlieghe’s stance has typically leaned on the hawkish side, suggesting that he will most likely switch to a hike at today’s meeting. In May, Vlieghe stated that his central projection is that 1 or 2 rates hike per year over the 3-year forecast period will be required.

Mark Carney (Neutral): The Governor has appeared to signal that the BoE are ready to raise rates. Carney stated that data has given the BoE confidence that the soft UK economy in Q1 was largely due to weather and not economic climate and reiterated that tighter policy will be needed. Carney likely to vote for a rate hike at today’s meeting.

Ben Broadbent (Neutral): The Deputy Governor has not given a lot of guidance in regard to monetary policy in recent times, which makes it slightly more difficult to judge what way he will vote. However, as he did in November 2017, the Deputy Governor will likely side with the majority and vote to raise rates.

Silvana Tenreyro (Dovish-Neutral): A relatively fine line on whether Tenreyro is on the dove or neutral camp. In her most recent statement the BoE member signaled that she would be ready to join the hawkish members on the committee, having noted that it was prudent to wait in May and June to confirm that the soft patch in Q1 was due to weather related effects, which has been the case with growth picking up slightly in Q2. Consequently, similarly to the November 2017 meeting, Tenreyro could switch to a rate hike at today’s meeting.

Sir Dave Ramsden (Dovish-Neutral): Similar to Tenreyro, Ramsden is another rate setter who you could argue that they are a dovish or neutral member. A relatively hard one to call with Ramsden who voted against raising rates in November 2017 having judged that Brexit is likely to continue to weigh on investment and given that the government have stepped up preparations for a “no deal Brexit”, risks to the downside have increased.

However, Ramsden recently stated that data so far has suggested that the interpretation of a slowdown in Q1 as temporary looks to have been the case, while he also added that unusually subdued growth in wages appears to be coming to an end. A very close call with Ramsden today, but overall, he may indeed vote to keep rates on hold.

Sir Jon Cunliffe (Dovish): The most dovish member on the committee, Jon Cunliffe. Given recent comments from the rate setter, Cunliffe has signaled that he is not ready to raise rates by stating that interest rates should have a “stodgy” response to signs of economic recovery.