We released our 3Q forecasts for equities, US Dollarand the Japanese Yen in the DailyFX Trading Guides page

Asia and Pacific benchmark indexes traded lower throughout Thursday’s session as trade war concerns dominated headlines as expected. Shortly after Wall Street closed earlier, US President Donald Trump asked Trade Representative Robert Lighthizer to consider raising tariffs on the proposed $200b in Chinese imports. This would involve levies of 25% as opposed to the original 10%.

The official announcement confirmed yesterday’s speculation of one which failed to offer general weakness in Asian stocks. This time was different. Chinese shares were the hardest hit with the Shanghai Composite down 2.45%. Following was South Korea’s KOSPI which declined around 1.74%. Japan’s Nikkei 225 was about 1 percent lower. The ASX 200 fell around 0.47%.

On the FX side of things, the deterioration in sentiment weighed against commodity currencies like the Australian and New Zealand Dollars. This was further compounded by a rising US Dollar which during times of broad market weakness, tends to benefit as the world’s reserve currency. The anti-risk Japanese Yen also benefited, rising against its major counterparts including USD.

Gains in the Yen speak to its focus on risk trends rather than the fundamentals. During Thursday’s session, Bank of Japan’s Deputy Governor Masayoshi Amamiya spoke and said that it is ‘difficult’ to reach 2% inflation by fiscal year 2020. This followed Tuesday’s relatively dovish BoJ monetary policy announcement. If sentiment continues souring on trade war fears, the Yen could have more room to gain.

Looking ahead, the top tier economic event risk will be Thursday’s Bank of England ‘Super Thursday’ policy release. There, the BoE is anticipated to raise rates from 0.50% to 0.75% as more central banks look to tighten policy. Thus, their forward guidance and anticipation of future rate increases is what will drive the British Pound. The most recent softer UK CPI report may even result in some patience before the next hike. This could weaken GBP and offer USD gains at the expense of its Australian Dollar counterpart.

The Australian Dollar still remains in prolonged consolidation against its US counterpart since mid-June. At the moment, AUD/USD is testing a near-term rising support line from earlier this month. A break below it will expose the range of July lows between 0.7330 and 0.7315. This area also includes the May 2017 low. Meanwhile, near-term resistance appears to be 0.7481 which is the outer boundary of the pair’s consolidation. 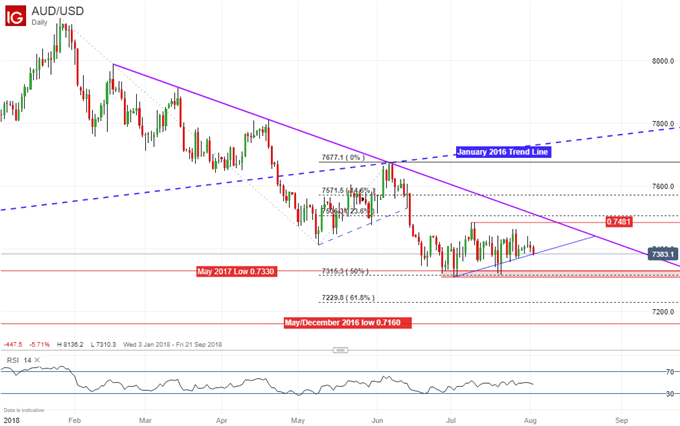 AUD/USD and other equities Trading Resources: