Asia/Pacific benchmark indexes mostly traded cautiously higher, brushing off potential threats from US President Donald Trump that he may impose higher tariffs on $200b of Chinese imports. Rather, trade war worries seemed to be ebbing on earlier reports that the two world’s largest economies are readying up to restart talks in an attempt to defuse tensions.

The Nikkei 225 led the way 0.72% higher towards the end of Wednesday’s Japan trading session with most of the gains deriving from information technology and industrials. South Korea’s KOSPI was up 0.38% despite a miss in local export growth. Australia’s ASX 200 was little changed at +0.06%. Only Chinese shares fared worse with the Shanghai Composite heading about 0.32% lower.

Looking at the major currencies, the US Dollar edged higher as traders perhaps took bets ahead of today’s Fed rate announcement. The New Zealand Dollar was lower as it digested worse-than-expected local jobs data. A stronger greenback weighed against the sentiment-linked Australian Dollar which as unable to capitalize on the rise in stocks.

Meanwhile, the Indonesian Rupiah weakened slightly against the US Dollar on a mixed local inflation report. Indonesian CPI clocked in at 3.18% y/y in July which was worse than the 3.20% projection. However, the core rate was 2.87% y/y versus 2.74% anticipated. This is within Bank of Indonesia’s parameters and in the meantime, it may focus on defending IDR with foreign exchange reserves.

Ahead, all eyes are on the FOMC rate announcement. There, the central bank could dial up its hawkish tone given that the markets are not quite fully pricing in a second rate hike by the end of this year yet. Such an outcome could not only lift the US Dollar further, but stocks like the S&P 500 or even the Nikkei 225 may decline on prospects of tightening global credit conditions.

On a daily chart, USD/JPY is testing January/December support around 112.00 after pushing higher on near-term channel support. A push higher exposes the 61.8% Fibonacci extension at 112.30 followed by the 76.4% level at 113.28. In the event the pair turns lower and pushes under near-term support, the December 2017 trend line could reestablish itself as a barrier. 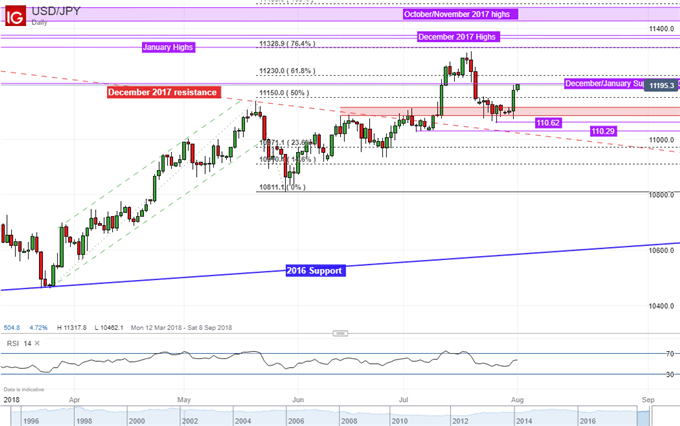 USD/JPY and other equities Trading Resources: