The USD/JPY climbed as much as 0.40% as the markets finally got a delayed Bank of Japan monetary policy announcement that had traders impatiently waiting on their toes. Heading into the announcement, there was speculation that the central bank will tweak its monetary policy settings as the 10-year government bond yield rose above the 0% yield curve control target. Here is what they did.

The Bank of Japan left its main monetary policy tools unchanged: the balance rate stayed at -0.100%, the 10-year JGB yield curve control target at more or less 0.000% and QQE at 80 trillion Yen. However, they would allow more flexibility in their bond market operations (upward and downward movement in the 10-year yield) and that they would shift ETF allocations further to the Topix from the Nikkei.

Japan has been struggling to hit sustainable two percent inflation and that seems to be the case going forward. The central bank cut its forecasts for CPI this year, 2019 and 2020 adding that it is “likely” to take more time than expected to achieve two percent. For an ‘extended period of time’, the BoJ intends to keep very low interest rates. Do keep in mind that they will ‘act promptly’ in case of a rapid increase in yields.

Ahead, USD/JPY faces plenty of event risk ranging from central bank rate decisions to trade wars. In the former, the Fed may dial up their hawkish rhetoric given that Donald Trump undermined their efforts a couple of weeks ago. This may boost the US Dollar, sending USDJPY higher. As for the latter, news recently crossed the wires that Canada has been rejected from NAFTA talks. 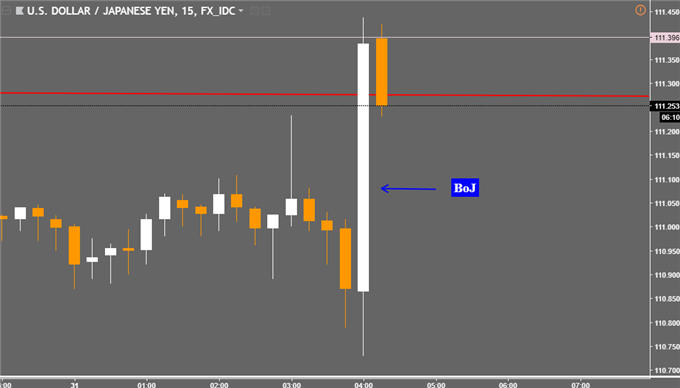 Following the Bank of Japan rate announcement, USD/JPY still finds itself needing upside momentum to be able to resume its dominant uptrend from April. It is still wedged on a descending trend line from August 2015 that on the monthly chart is part of a symmetrical triangle continuation pattern. The recent break below a near-term rising support line has been met with oscillation. 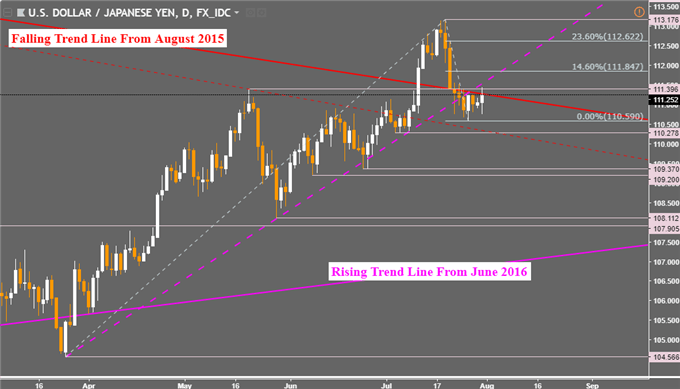