Just started trading currencies such as the Japanese Yen? Check out our beginners’ FX markets guide!

Asia/Pacific benchmark indexes traded cautiously lower following losses on Wall Street which were attributed to unease following disappointing earnings out of Facebook, Twitter and Intel Inc. Indeed, information technology helped drag down the Nikkei 225 on Tuesday as it declined about 0.45%. However, this took a change of pace after the Bank of Japan interest rate decision crossed the wires.

There, the central bank tweaked some of its monetary policy settings and downgraded their outlook for inflation. Prospects of looser stimulus for longer offered the Nikkei 225 some room to appreciate, rising as much as 1 percent after the announcement. However, some of those gains were pared and the index was about 0.25% higher. The Japanese yen head lower on the relatively dovish statement.

Chinese shares were little changed, though biased slightly lower with the Shanghai Composite at around -0.03% for the day. Meanwhile, Australia’s ASX 200 fared better compared to its counterparts. The index was up about 0.17%, boosted by financials. Meanwhile, South Korea’s KOSPI index was down roughly 0.14%.

The Canadian Dollar traded lower against its major counterparts after reports crossed the wires that Canada would be rejected from NAFTA negotiations. USD/CAD jumped more than 0.35 percent, touching highs last seen on July 25th. Confirmation would reverse some of the positive spillovers the Trump/Juncker summit implied for Canada. Plenty of event risk is also ahead for the Loonie including local GDP data ahead.

In addition, upcoming Eurozone inflation data could send the Euro lower and give space for the US Dollar to rally. Lately, economic news flow out of the nation bloc has been tending to underperform relative to economists’ expectations. This could open the door for a downside surprise here that may undermine 2019 ECB rate hike expectations.

The Nikkei 225 is wedged in between a near-term descending line from mid-July and the July 23 lows around 22,339. This was after a break below a rising support line from earlier this month. However, a lasting turnaround of its upside progress since then (which occurred after a hammer bullish reversal pattern) requires a push below 22,339. From there, the next target may be the 23.6% Fibonacci extensions at 22,095. 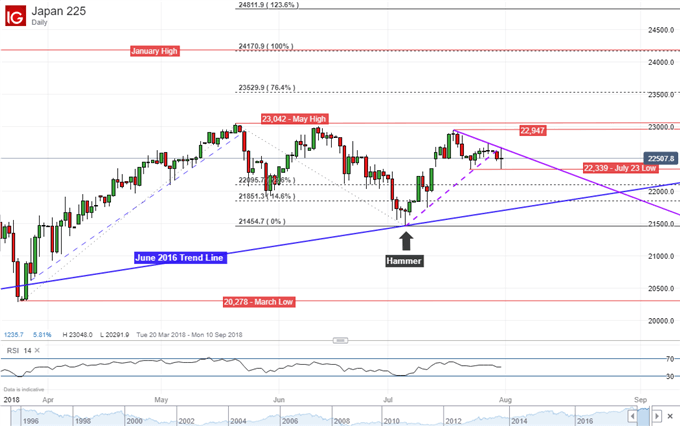 Nikkei 225 and other equities Trading Resources: