Yen Rises Despite Nikkei 225 Gains. USD, S&P to Tune in for GDP

Asia/Pacific benchmark indexes traded mixed, with some gains seen in Japanese stocks. The Topix index headed for a third week of consecutive wins while the Nikkei 225 rose 0.29%. Markets may have continued digesting the trade agreement reached between US President Donald Trump and European Commision President Jean-Claude Juncker.

Despite the gains there, the anti-risk Japanese Yen headed cautiously higher against its major counterparts. Lately, there has been increased speculation that the BoJ is could become more flexible at its monetary policy decision next week. Today, the 10-year government bond yield traded above the central bank’s target (0%) at 0.105%.

Meanwhile, the sentiment-linked Australian Dollar also appreciated as local stocks saw some of the best performance on Friday. The ASX 200 was up about 0.76% heading into this week’s close with all but consumer staples contributing to impressive gains. Iron ore, a key export for the country, also headed higher amidst China’s efforts to bolster its economy.

Speaking of, Chinese shares seemed to be the ones struggling the most as anticipated. The Shanghai Composite was little changed but slightly biased lower at -0.06%. The Yuan did appreciate though despite a weaker fixing from the PBOC. This seemed to help contribute to some marginal US Dollar weakness, but the real test for the greenback will come later today.

Ahead, the top tier event risk for the remainder of this week is a highly anticipated US GDP report. The first estimate of second quarter GDP points to 4.2% annualized growth q/q. This would be the fastest pace of expansion in about four years.

Lately, US economic news flow has been tending to slightly underperform relative to economists’ expectations. This opens the door for a downside surprise that could hurt the greenback and potentially stocks. Do keep in mind though that the Fed’s projection of 2018 growth is 2.8%, so even a slight miss could still keep the central bank’s estimate very much prominent and loses in USD could reverse later on.

After negative RSI divergence preceded USD/JPY’s recent fall, the pair has been caught by a range of former resistance between 111.13 and 110.83 which held back in June. It appears to be acting as new support. From here, a break below exposes the early July lows around 110.29. On the flipside, pushing higher exposes the December/January support area at 112.00. 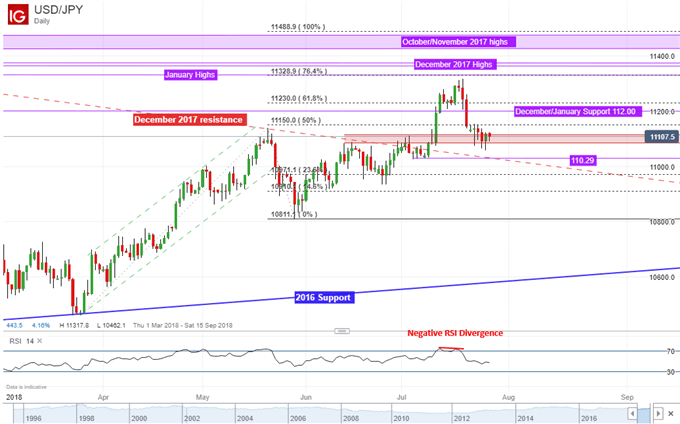