US Dollar Holds Near Weekly Highs after US GDP Tops +4%

- Consumption trends remain strong, but a likely one-time surge in exports seems to be prime driver of the outperformance in growth.

- The DXY Index initially traded lower but recovered quickly, and remains near its daily and weekly highs after the release.

In the second quarter, the US economy grew by its fastest rate of growth in four years, coming in at +4.1% from +2.2% previously. Overall, the report slightly missed expectations, which were at +4.3% before the release. While the headline of the GDP release was a nice improvement, other aspects of the report were mixed, knocking down the US Dollar slightly.

Personal Consumption, the largest component of GDP (thanks to the US consumer accounting for nearly 70% of GDP), improved to +4.0% from +0.5%. But there were also curious aspects of the report that suggest the future isn’t entirely rosy. Net exports added +1.1% to growth (up by +9.3% y/y overall), but this is likely a one-off event due to foreigners pulling forward demand in anticipation of the Trump tariffs.

Accordingly, it looks like trade could be a drag on the US economy in the second half of the year. But thanks to the strong consumption figures, coupled with a drawdown in inventory production (which subtracted -1.0% from headline GDP, and in turn suggests inventories will need to be replenished in the second half of the year, a positive for growth), the major aspects of the GDP report suggest that the underlying trend of the US economy remains strong.

Here’s the data pushing the US Dollar slightly lower this morning:

Following the GDP release this morning, Fed funds futures were pricing in 80% chance of a 25-bps rate hike in September (the third of 2018) and a 60% chance of a hike in December (the fourth of 2018). Coming into this week, odds for hikes in September and December were near 78% and 58%, respectively. 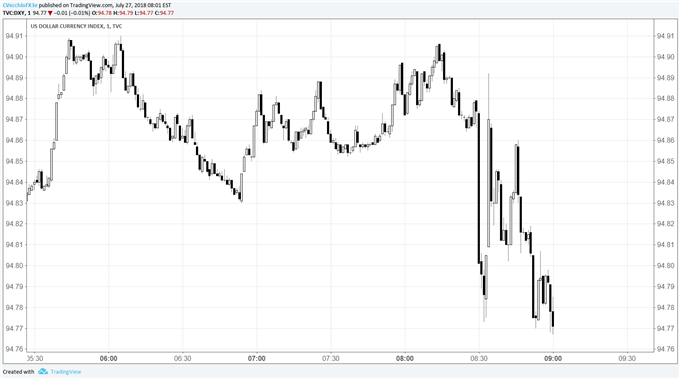 The US Dollar (via the DXY Index) only traded slightly lowering following the GDP release this morning. The DXY Index dropped from 94.87 ahead of the report to as low as 94.77 thereafter, where it was trading at the time this report was written. Overall, the DXY Index remained in positive territory for the week, having added +0.34% since last Friday’s close.