Risk trends flourished towards the end of Wednesday’s US trading session as US President Donald Trump and European Commission President Jean-Claude Juncker reached an agreement to avert a trade war. The S&P 500 climbed, finishing the day about 0.91% higher. Not surprisingly, the sentiment-linked Australian and New Zealand Dollars rose. The US Dollar fell as demand for the haven unit subsided.

According to the details of the report, the European Union will lower industrial tariffs while increasing soybean imports. There was also a broad and general agreement to lower tariffs and “slash costs dramatically”. In addition, earlier in the day US senators introduced a bipartisan bill called the “Automotive Jobs Act of 2018” that is aimed at delaying Trump’s proposed 24% tariffs on imported cars.

Keep in mind that the US president could still impose those auto levies on national security grounds after Commerce Secretary Wilbur Ross finishes the required investigation. However, today’s progress has made that prospect more unlikely. With that in mind, Asian shares could echo gains from Wall Street as markets around the world rejoice on the news, but there has also been a slight setback.

Facebook Inc. saw rather mixed second quarter earnings which sent its share price tumbling a whopping 20 percent in after hours trade. While earnings per share (EPS) beat expectations, revenue as well as their monthly active users missed their targets. What seemed to really drive their share price down was their CFO announcing that total revenue growth rates will continue decelerating and that total expense growth will exceed revenue growth in 2019.

A Look Ahead – Stocks May Not Get Full Rally Potential

Following the slump in Facebook shares, the sentiment-linked Australian Dollar pulled back some of its gains from the Trump/Juncker trade agreement and headed cautiously lower while the anti-risk Japanese Yen popped a little higher.

A lack of key economic event risk during Thursday’s Asia/Pacific trading session will place risk trends as the key driver for the markets. As such, some gains from the positive news out of Washington could be held back as the disappointing Facebook report clouds some of that optimism. We shall see which dynamic prevails but in either case, the New Zealand Dollar could also be volatile. 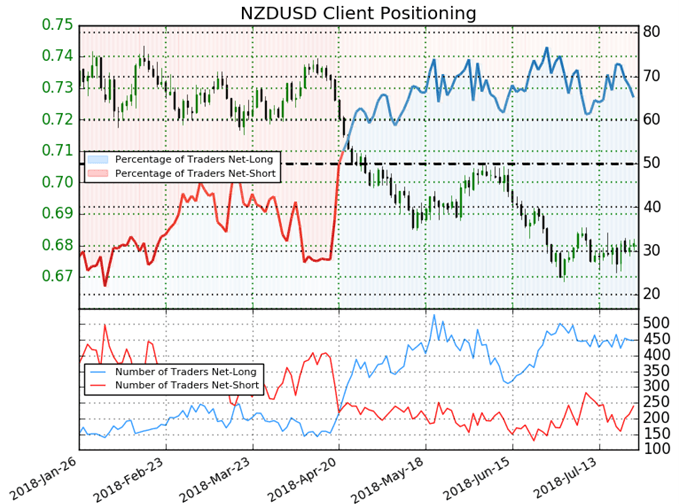 Retail trader data shows 65.2% of NZD/USD traders are net-long with the ratio of traders long to short at 1.87 to 1. In fact, traders have remained net-long since Apr 22 when NZD/USD traded near 0.73035; price has moved 6.8% lower since then. The number of traders net-long is 2.0% lower than yesterday and 4.7% higher from last week, while the number of traders net-short is 15.5% higher than yesterday and 6.2% higher from last week.