Asia/Pacific shares traded rather mixed by Wednesday afternoon trade following a cautiously optimistic day on Wall Street. Early into the session, a tweet from US President Donald Trump momentarily sent shares lower. The President called for the US and EU to “drop all tariffs, barriers and subsidies”, adding that his country is ready to do so but its European counterpart is not.

You could find some of the best performing equities in Japan where the Nikkei 225 was up close to 0.50 percent. Chinese shares were little changed with the Shanghai Composite up just under 0.1%. South Korea’s KOSPI headed about 0.22% lower while Australia ASX 200 declined about 0.31%. The latter was dragged down by financials, health care and consumer staples.

In the FX spectrum, the Australian Dollar depreciated across the board following soft local inflation data, which decreased 2019 RBA rate hike expectations. Consequentially, the US Dollar seemed relatively more attractive from a yield standpoint as it appreciated following the Australian CPI release. This is because weaker price growth could pave the way for the Fed to continue overtaking the RBA in rates next year.

With that now behind us, attention ahead turns to risk trends and immediately ahead is Trump’s meeting with European Commission President Jean-Claude Juncker. The two will negotiate a deal on trade and the former has expressed his eagerness and willingness to attach tariffs on a nation that does not negotiate a fair deal. Signs that the US may even press ahead with auto import levies will bode ill for stocks and vice versa.

The Nikkei 225, despite its recent push lower, remains in an uptrend since earlier this month supported by a rising trend line. A break below the line exposes the July 23rd low at 22,359 followed by the 23.6% Fibonacci extension at 22,095. On the other hand, immediate resistance is the July 18th high. A break above the May 21st high at 23,046 could open the door to resumption of Nikkei 225’s uptrend from April/May. 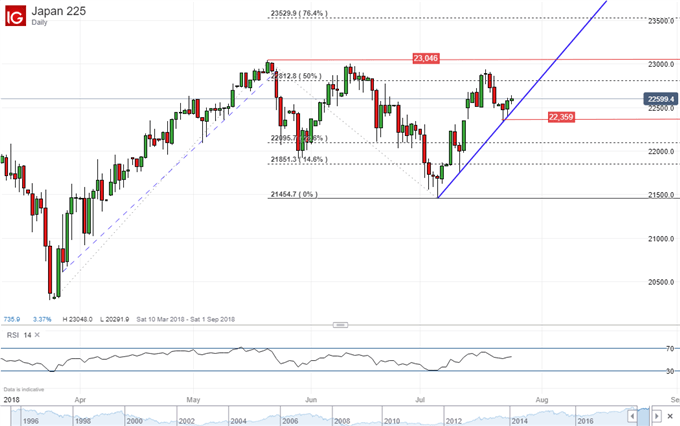