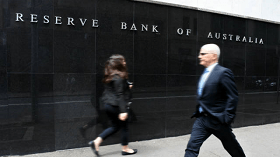 See our Q3 AUD forecast to learn what will drive the AUD through the quarter.

Overnight saw the release of the latest Australian CPI data for Q2 whereby the headline figure printed at 2.1%, however, underwhelmed expectations of 2.2%. The RBA’s preferred measure of inflation, which is the trimmed mean, rose 1.9%, below the central bank’s target band of 2-3% for a 10th consecutive quarter. Looking closely at the numbers, CPI for market services, which excludes prices controlled by the government, were up 1.1%, implying that core inflation is simply not rising. Consequently, this calls for RBA inaction with markets not fully pricing in a 25bps hike until the beginning of 2020.

Australia’s housing market has been one of the nations key drivers of the economy, which has grown for 27yrs without a downturn. Auctions are typically a bellwether of property demand in Australia, however, they have fallen sharply since 2017 and as such this has heightened recessionary risks with investors heavily underweight Australia relative to other regional benchmarks. 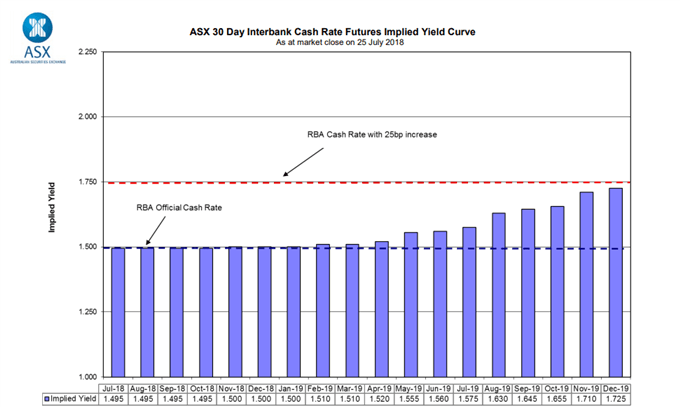 Widening Rate Differentials Moving in Favour of USD vs. AUD

The RBA’s inaction is in stark contrast to the Federal Reserve who have pointed towards two more rate hikes this year, while 3 rates hikes in 2019 are also pencilled in. Subsequently, this has prompted US yields to surpass Australian bond yields which in turn increases the attractiveness of the USD over the AUD as investors search for yield. 2yr US bond yields are now 63bps more than Australian 2yrs, which is the largest gap since mid-2000. As such, the continued widening of the US-AU bond spread suggests that more losses are on the horizon for AUDUSD. 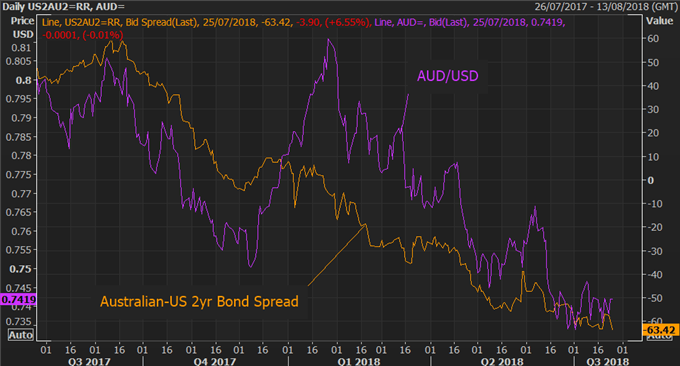 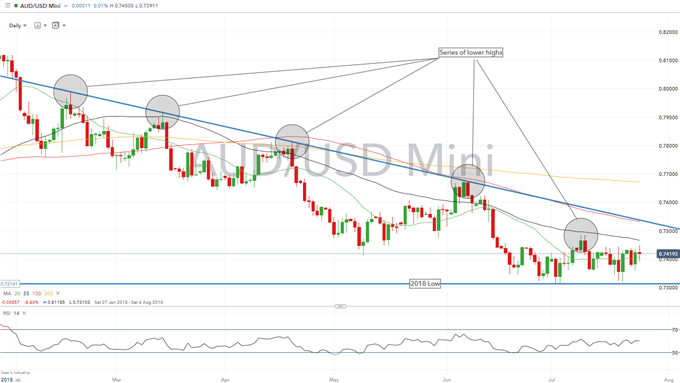 AUDUSD continues to remain offered, however, a downside record of the 0.7314 (2018 low) is needed in order to spark a broader sell-off in the pair. Upside has been capped by the 55DMA situated at 0.7466, while a break above the range high of 0.7485 would suggest that selling has stalled for now.

Where Next for AUDUSD?

According to IG Client Positioningdata shows 59.1% of traders are net-long with the ratio of traders long to short at 1.45 to 1. In fact, traders have remained net-long since Jun 05 when AUDUSD traded near 0.75736; price has moved 1.9% lower since then.