Asia/Pacific shares headed higher by Tuesday afternoon trade as expected, echoing gains seen from the US session where upbeat earnings pushed financials higher. The Nikkei 225 gapped to the upside and was up more than 0.62 percent, though the gains were largely thanks to the gap as it oscillated back and forth. Meanwhile, South Korea’s KOSPI and Australia’s ASX 200 climbed 0.38% and 0.61% respectively.

Chinese shares were the clear outperformers with the Shanghai Composite rising around 1.60%, heading for a third consecutive day of gains. Local shares rallied as the country unveiled a simulative package aimed at boosting the economy. Part of the plan involves tax cuts for smaller firms, the State Council noted that it is intended to be as a flexible response to external uncertainties.

Despite the rally in stocks, the anti-risk Japanese Yen found itself little changed. USD/JPY was closely tracking the Nikkei 225 which at one point fell about 0.60% before rising back to where it gapped up to. The sentiment-linked Australian and New Zealand Dollars attempted to capitalize on the improvement in risk trends, but an osculating US Dollar swinging between gains and losses showed to be too much.

Ahead, the Markit US Services and Manufacturing PMIs could offer a glimpse of what to expect from Friday’s local GDP report. These surveys can be important leading indicators for economic growth. Both of the measurements are anticipated to show slowing expansion and if they underperform, it could sour sentiment and take shares down with them.

The ASX 200 has been struggling to regain upside momentum since resuming its uptrend back in late-May. In its oscillation, the index is now approaching a near-term rising line from late-June which is immediate support. On the other hand, near-term resistance is around 6,307 which is the series of highs seen throughout this month so far. That is then proceeded by the July 9th high at 6,333. 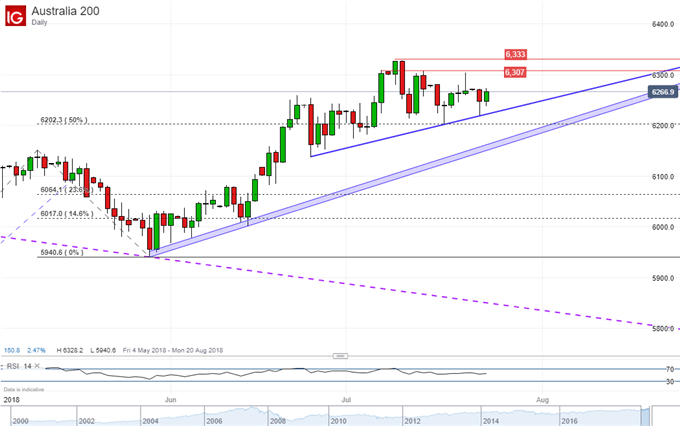