US equity futures are on the backfoot (DJIA -0.1%, Nasdaq 100 -0.3%, S&P 500 -0.1%) to begin the week. This follows similar declines in EU bourses as investors weigh uncertainty over trade wars amid reports at the back end of last week with optimism over earning season.

JPY: The Japanese Yen has been the outperformer following reports that the BoJ could potentially tweak its policy at the upcoming meeting. Subsequently, speculation has increased that the BoJ may announce measures to scale back its massive monetary policy stimulus. The sources piece noted that the BoJ were in active discussions in regard to altering its yield curve control target and stock buying techniques in order to increase its effective in order to push up inflation. USDJPY briefly broke through the 111.00 handle to the downside, however a recovery in the Dollar has seen initial losses pared.

USD: The US Dollar has clawed back some of the Trump-inspired losses on Friday as US Treasury Secretary Mnuchin reassured markets that Trump was not trying to intervene in FX markets and respects the independence of the Fed. Alongside this, firmer US yields have lifted the Dollar this morning, while eyes will be on Friday’s GDP report, whereby expectations are as high as 5%.

GBP: The main focus for GBP traders today will be comments from Bank of England rate setter Ben Broadbent at 1700GMT, who is the last scheduled speaker before next week’s Quarterly Inflation Report. An upbeat assessment from the deputy governor and no overtly dovish rhetoric will likely provide support for GBP and certainty over a rate hike next week. Although the Pound remains vulnerable to headline risk centred around Brexit and the turbulent politics in the UK. GBP may find as a reprieve as parliament go into recess on July 24th, which in turn may lower the political noise for the time being.

Crude Oil:Brent crude futures have risen over 1.5% this morning following the war of words over the weekend by Iran and Trump. This comes amid the growing pressure from the US to end its nuclear program, through demanding that Iranian oil sales be brought to zero, alongside the looming US sanctions. Consequently, this has prompted the Iranian President to threaten to close the Strait of Hormuz, which is the world’s most crucial waterway, in order to potential counter US sanctions that will come into effect in November. 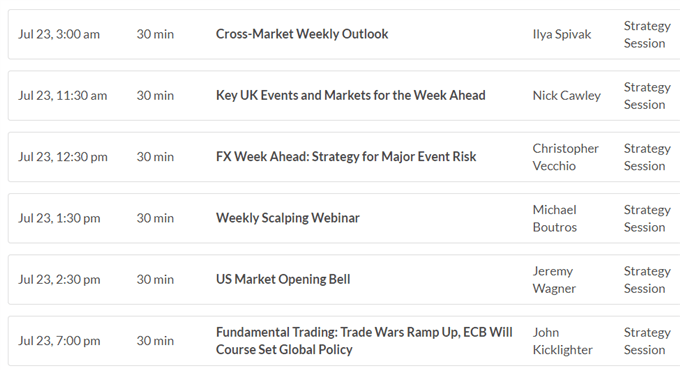