Sterling and Euro News and Analysis

EURGBP Upside May be Capped by Previous Highs/Fibonacci

EURGBP recently broke out of its medium-term trading and continues to probe higher prices. The pair are now approaching a handful of recent highs, and a strong Fibonacci retracement level, and will need additional impulses to help them break through this confluence of resistance.

Next week’s European data slate is busy, and potentially market moving, and includes the latest ECB monetary policy meeting and press conference. At the last meeting the ECB surprised the market when it said that interest rates would be kept at their current levels ‘through the summer of 2019’ and that it would top buying bonds (QE) at the end of 2018. The central bank would keep re-investing coupons and maturity proceeds and still sees QE as an important monetary tool. EURGBP fell on the announcement but has steadily picked-up over the last 5 weeks to stand at a four-month high against an albeit weak British Pound.

Next week’s meeting could see the central bank give the market more information on interest rate timing and where they will be re-investing QE proceeds, with the market currently expecting longer-term bonds to be the target.

Ahead of the ECB meeting, there are a raft of sentiment indicators that will steer the Euro, while there are no UK releases of note, although Brexit updates and news may be released at any time. 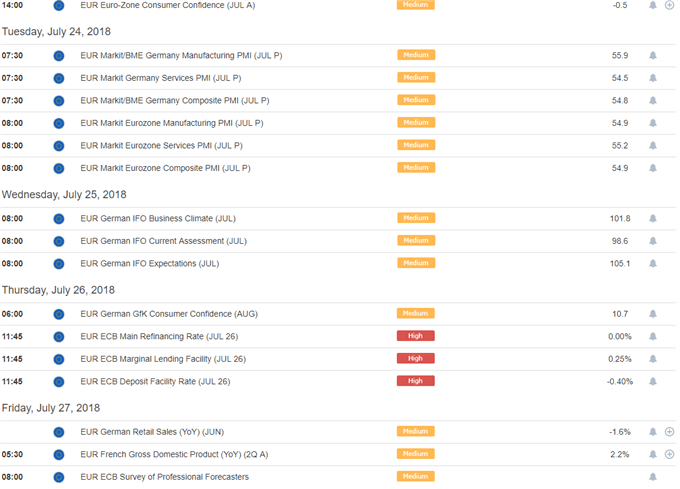 We have just release our Q3 Trading Forecasts for a wide range of Currencies and Commodities, including GBP and EUR.

Looking at the daily EURGBP chart, there are five levels or resistance approaching between 0.89640 (50% Fibonacci retracement) and 0.90450 (61.8% retracement). The pair is trading above all three moving averages but the latest uptick has seen the RSI indicator move into overbought territory which may act as a brake in the short-term. The downside will find healthy support at 0.88830 (23.6% retracement). 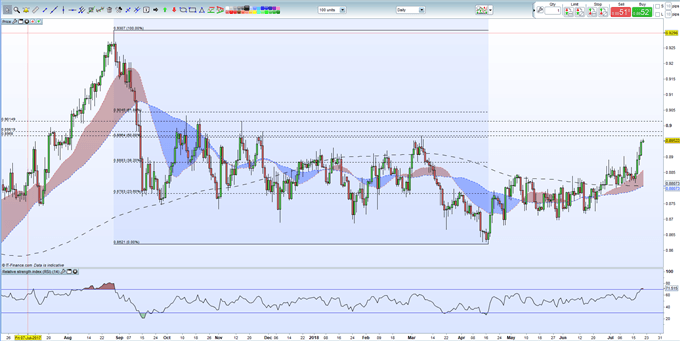