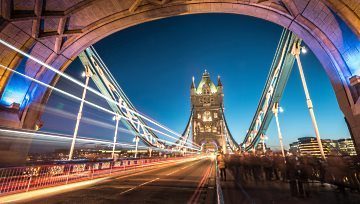 GBPUSD Battered from Both Sides

Sterling is reeling against the US Dollar Friday after June UK retail sales missed expectations although May’s figures were all revised higher. Over a three-month period, retail sales rose, according to the ONS, due to the warm weather while football dampened the June numbers. Earlier this week UK weekly average earnings remained flat while core year-on-year inflation – the central bank’s preferred measure – fell to 1.9% from 2.1%. These numbers, when combined with ongoing Brexit concerns, should have taken an August 2 rate hike off the table but market expectations for a 0.25% hike are still in the mid-high 60%, a sign that the market still believes that the BOE will tighten monetary policy.

Brexit continues to make Sterling-negative headlines after UK PM Theresa May just avoided defeat on a series of custom union votes. The recent resignations of Brexit-heavyweights Boris Johnson (Foreign Secretary) and David Davis (UK lead Brexit negotiator) continue to fuel talk of a leadership challenge to the PM, a situation that would lead to further delays in the Brexit process. The new Secretary of State for Exiting the European Union Dominic Rabb will today meet with EU lead Michel Barnier in Brussels to discuss the contentious UK White Paper. Any further rejection by the EU will lead to further calls for a hard Brexit, a situation that neither side wants, and one that would send Sterling spinning even lower.

GBPUSD continues to fell the full force of a strong US dollar, driven higher by a hawkish Fed outlook and continued monetary tightening. Two more 0.25% rate hikes are expected this year – bring the total to four – and three more are inked in for 2019.

We have just released our Q3 Trading Forecasts for a wide range of Currencies and Commodities, including GBP and USD.

GBPUSD – A Series of Monthly Lower Highs and Lower Lows

The longer term GBPUSD chart shows highlights how budding optimism for a potential soft Brexit has turned this year with the pair giving back a substantial chunk of last year’s post-referendum gains. A series of monthly lower lows paints a negative picture with 2017’s higher lows becoming targets for Sterling bears. 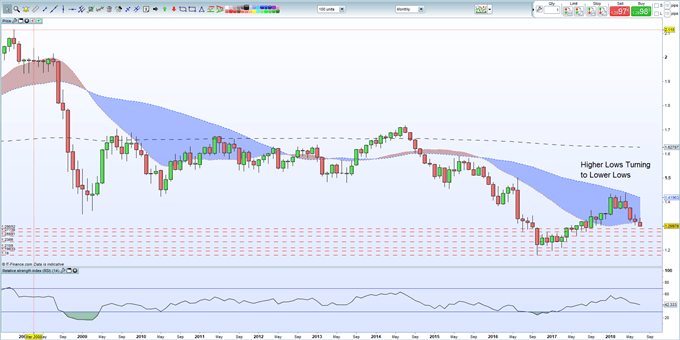 The daily GBPUSD chart also remains gloomy for Sterling bulls with support levels cracking. This renewed pessimistic outlook will be confirmed if the pair close below the 1.30272 level (October 2017 low) and would leave the August 24, 2017 swing low at 1.27738 the next target.

Traders who are looking at Sterling through rose-tinted glasses will point to the RSI indicator which is touching oversold levels. However, the next two levels of support, 1.29052 and 1.27738, will need to hold if further, heavier losses are to be avoided.

While Sterling looks weak on the short- and long-term charts, any cessation of Brexit hostilities and a 0.25% rate hike at the August 2 MPC meeting could prompt a sharp rebound in the value of Sterling back to the 1.3300 level. 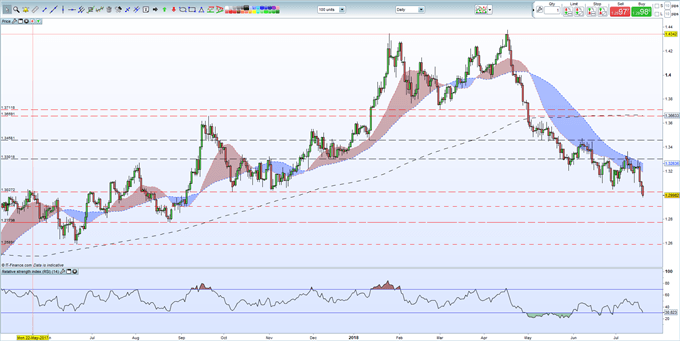