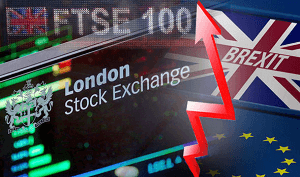 The FTSE 100 has continued to find a reprieve from the fall in the Pound in light of the recent political tensions, whereby PM May could potentially face a leadership contest over the government’s handling of Brexit negotiations. Alongside this, softer than expected inflation and retail sales data has provided another headwind for the currency. In reaction to the slump in the Pound, the FTSE has grinded higher, as such, provided GBPUSD makes a firm break below the psychological 1.30 level, there is a potential for the FTSE 100 push through 7700 with a break out of its recent range.

As a reminder, given that many of the companies within the FTSE 100 are global firms that earn a significant amount of their earnings overseas, particularly in the US, the fall in the Pound therefore increases the value of earnings overseas that are priced in Dollars. That in turn boosts share prices and thus supporting the index. 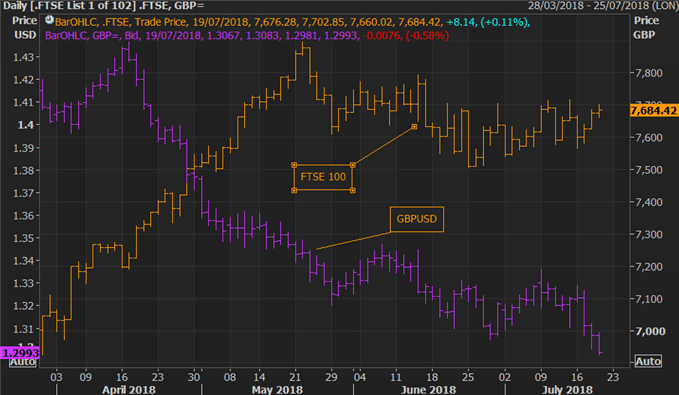 The biggest drag on the FTSE 100 are material names with the sector down 1.7% and thus has capped further upside in the index. A large factor behind this has been the increased uncertainty regarding China, which has been plagued by the ongoing tit-for-tat trade dispute with the US. Consequently, sentiment in China has deteriorated which has been see through its exchange rate with the Chinese Yuan falling to its lowest level in over a year against the greenback. In response to the woes in China, commodity prices have weakened in recent weeks with gold prices now trading at its lowest level since July 2017. In turn, this has pressured some of the largest commodity producers within the index, with the likes of Anglo American, Antofagasta and Randgold Resources trading with sizeable losses.

On the upside, the 7700 offers slight resistance, in which a firm break above will allow for a test of the top of the recent range at 7718. In terms of support, 7652 continues to underpin the index, which marks the 23.6% Fibonacci Retracement of the 6841-7903 rise. On a daily timeframe, momentum and RSI indicators suggest risks are skewed to the upside. 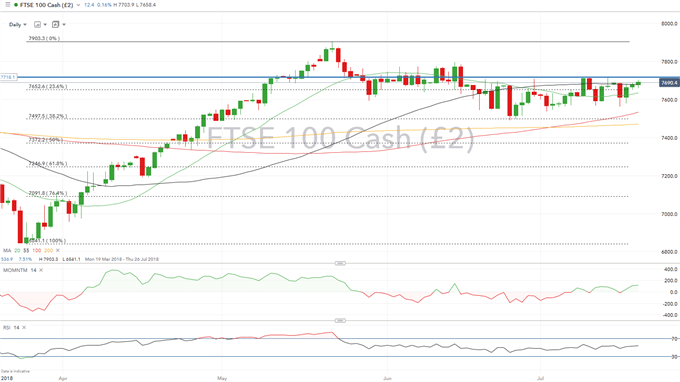 The latest IG client positioning data shows 32.9% of traders are net-long with the ratio of traders short to long at 2.04 to 1. As such, the fact traders are net-short suggests FTSE 100 prices may continue to rise. Traders are also further net-short than yesterday and last week. Subsequently, the combination of current sentiment and recent changes gives us a stronger FTSE 100-bullish contrarian trading bias.