Find out what retail traders’ Australian Dollar and equities buy and sell decisions say about the coming price trends!

Asian stocks traded rather mixed by Thursday afternoon trade, some exchanges followed US gains while others did not. On Wall Street, the S&P 500 and crude oil prices rose amidst some positive earnings reports from major banks. Now, stocks appear to be consolidating, awaiting for updates to US/China trade talks

In Japan, the Nikkei 225 initially rallied but closer towards the end of Thursday trade, the index was little changed. Australia’s ASX 200 fared better with gains surpassing 0.4%, led by financials and materials. South Korea’s KOSPI was cautiously lower, down about 0.24%.

Chinese shares fared a little worse with the Shanghai Composite down over 0.50%. Keep in mind that during Wednesday’s session, Donald Trump’s top Economic Adviser Larry Kudlow blamed China’s President Xi Jinping for holding off on trade talks. Perhaps some concerns from there lingered on here.

In the meantime, China’s State of Administration of Foreign Exchange (SAFE) noted that the resilient economy lays down the foundations for FX stability. The agency added that China’s risks are controllable and that FX reserves are ample. The Yuan did depreciate against its US counterpart throughout the session.

On the currency side of things, the Australian Dollar soared amidst a solid local jobs report that increased RBA rate hike expectations. Its close cousin, the New Zealand Dollar, fared worse as it declined across the board. The markets are closely watching the RBA and RBNZ to gauge who will be the first to raise rates potentially in 2019.

Ahead, the US Commerce Department is to begin a hearing over the next couple of days into whether or not auto imports pose a national security threat to the country. Signs that the world’s largest economy could be getting closer to applying auto tariffs could dampen sentiment as a result, potentially weighing on stocks and the sentiment-linked Australian and New Zealand Dollars.

On a daily chart, the ASX 200 appears to have formed a near-term rising support line going back to late-June. The index failed to push below it and now appears to be heading back to the July 9th high at around 6,333 which is near-term resistance. On the other hand, a break below support exposes the 50% midpoint of the Fibonacci extensions at 6,202. 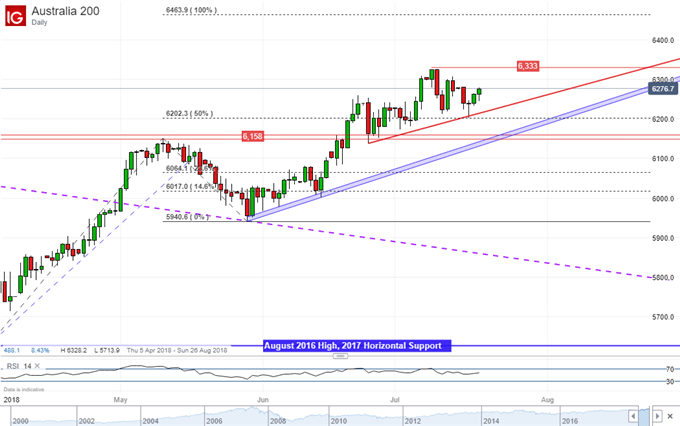