Find out what retail traders’ New Zealand Dollar and equities buy and sell decisions say about the coming price trends!

Asian stocks delivered rather mixed performance by Tuesday afternoon trade after the S&P 500 and NASDAQ declined during the prior US trading session. There, some investors were unnerved as the IMF saw risks to global growth amidst heightened trade tensions between developed economies. That was further amplified when the US filed WTO disputes, challenging retaliatory tariffs set by the EU, China and Canada.

Things were also volatile in the FX spectrum starting with the New Zealand Dollar which soared against its major counterparts. After brushing off a CPI miss, the currency appreciated the RBNZ’s core inflation gauge which clocked in at 1.7%. This was the fastest pace in seven years. Local two-year government bond yields rose, hinting at increasing Reserve Bank of New Zealand interest rate hike expectations.

The anti-risk Japanese Yen on the other hand suffered the most, falling as local shares rose. Meanwhile, the sentiment-linked Australian Dollar headed higher. It also rose with front-end government bond yields as the RBA meeting minutes showed that its next rate move is still likely a hike. Also adding into the picture some Yuan strength thus made for US Dollar weakness.

Ahead, markets will be looking for some central bank head commentary. Up first is a speech from Bank of England’s Governor Mark Carney. Following his speech Fed Chair Jerome Powell delivering a semi-annual testimony before a Senate Panel. Global trade tensions are almost sure to cross the path of discussion there and could offer some British Pound and US Dollar volatility.

On a daily chart, NZD/USD is heading higher following the RBNZ core inflation data to retest resistance around 0.6851. This area combines a trend line from March 2009 and the low set in mid-May. A break above then exposes 0.6922 which is the high made on June 22. On the other hand, a turn lower places the July 2nd low as support at 0.6689. 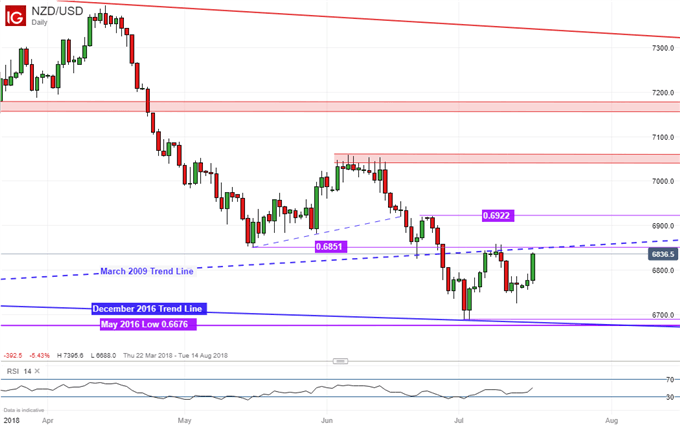